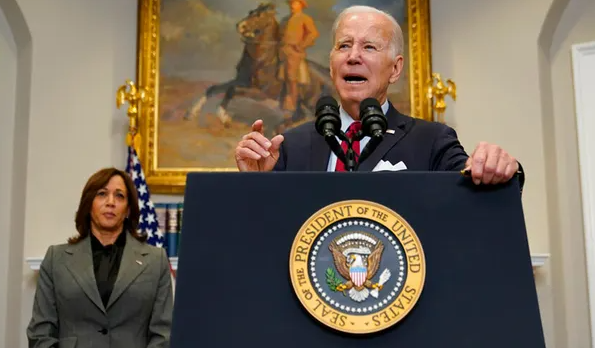 President Biden stumbled while explaining the replacement of Title 42, a public health legislation that has been used to dissuade migrants at the border, during a big White House speech Thursday outlining additional border security.

The speech comes just days before the president’s first-ever visit to the southern border, which will take place next week as his administration grapples with a massive influx of migrants. While asked why he is visiting now when Republicans have been urging him to do so since his election, Biden responded that Republicans “haven’t been serious about this at all.”

Title 42, according to the president, will be repealed by the end of the year.

“Title 42 is going to go away before the end of the year, in terms of the Supreme Court. My prediction. And then we’re going to have to use Title 9,” Biden said before quickly correcting himself to “Title 8.

Title 42 has been used to dissuade asylum seekers at the US-Mexico border 2.5 million times since March 2020. During the Trump administration, the law was enforced as an emergency health measure to halt the spread of COVID-19.
Republicans sued to retain the Title 42 limits in place, while Biden attempted to repeal them. For the time being, the rules have been upheld by the United States Supreme Court. Officials at the White House said they still believe the limitations should be lifted, but that they can continue to turn away migrants under immigration law.

If Title 42 is repealed, the Biden administration will revert to Title 8, which states that any illegal alien present in the United States “without having been admitted or paroled, or arriving in the United States at any time or place other than as designated by the Attorney General, is inadmissible.”

Biden stated on Thursday that the United States would immediately begin turning away Cubans, Haitians, and Nicaraguans who illegally cross the border from Mexico. The new measures build on an existing operation to deter Venezuelans from entering the United States, which began in October and resulted in a sharp decrease in Venezuelans approaching the southern border.

“Do not, do not just show up at the border,” Biden said as he announced the changes, advising: “Stay where you are and apply legally from there.”

On Sunday, Biden will make his first journey to the southern border as president, to El Paso, Texas. He will next travel to Mexico City on Monday and Tuesday to meet with North American leaders. El Paso is roughly 632 miles from the Rio Grande Valley in south Texas, where the border mayhem is at its worst.