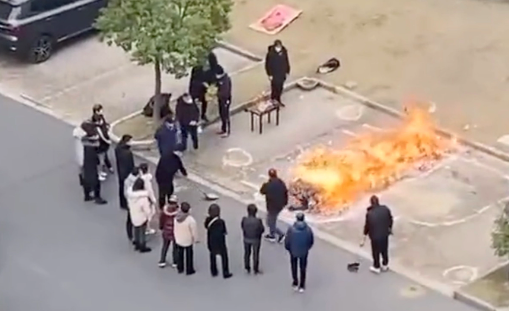 As a tragic result of the nation’s recent spike in COVID cases, graphic photographs appear to show Chinese families burnt the bodies of their dear ones in the street.

Chinese hospitals and funeral homes claim they are overburdened as a result of the country’s “zero-COVID” laws being changed last month.

Videos posted on Twitter purport to show unplanned cremations occurring in the streets.

One video shows the burning of a wooden coffin in what appears to be a rural area of the country.

Another video depicts a crowd of people gathering around a makeshift pyre that has been lit on fire, and it is thought that the footage was shot in Shanghai.

I've seen quite a few similar videos, but haven't posted any until now. Given what we learned from other sources about how difficult & expensive to cremate a body in a #crematorium in #CCPChina, I'm not surprised if someone in the countryside chose to do this.#ChinaCovidDeaths pic.twitter.com/hxhGdhPriS

One funeral home is so overburdened that it can only give families five to ten minutes to grieve. Shanghai is experiencing such a high death rate that the Longhua Funeral Home has to deal with five times as many bodies each day as usual.

According to a Longhua employee,“The whole system is paralyzed right now.”

Many people have turned to self-cremation due to the enormous demand for cremations and reports that funeral establishments have raised the price for the service in response to the demand.

According to screenshots posted online, a Shanghai resident claimed in her neighborhood group chat on December 28 that “I’ve tried multiple paths to cremate my father but none have worked.”

#CHINA: The #COVID outbreak is reportedly forcing people to burn the bodies of their families members on the streets as a result of emergency services and crematoriums' inability to accommodate the mass numbers of deceased. Heartbreaking. pic.twitter.com/Q5TYcG5VJG

The post added, “The funeral services hotline told me that all cremation slots are full until after the new year. Since national law doesn’t allow patients who die of infectious diseases to be stored at home, I shall find an empty patch in our neighborhood to cremate my father. If you have problems with this, please call the police.”

Last Thursday, relatives who were in line at the Yinheyuan Funeral Home in Guangzhou informed Radio Free Asia that they had left their loved one’s remains at home because the funeral home could not be reached by phone.

Lines of vehicles bearing the name “Jing Funeral” are seen waiting at an entrance in further footage from Beijing’s Babaoshan Funeral Home.

According to Radio Free Asia, the funeral service has been obliged to perform cremations 24 hours a day to meet up with an increase in demand.

Officials have only publicly acknowledged a small number of COVID fatalities since President Xi Jinping’s administration abruptly changed its zero-COVID policy in December, so it’s unclear how many people have died from the virus overall.

According to Airfinity, a London-based provider of scientific data, China experiences approximately 2 million COVID cases daily and about 14,700 deaths.

On December 24, 2022, when the number was last updated, 5,241 people had died nationwide as a result of the outbreak.