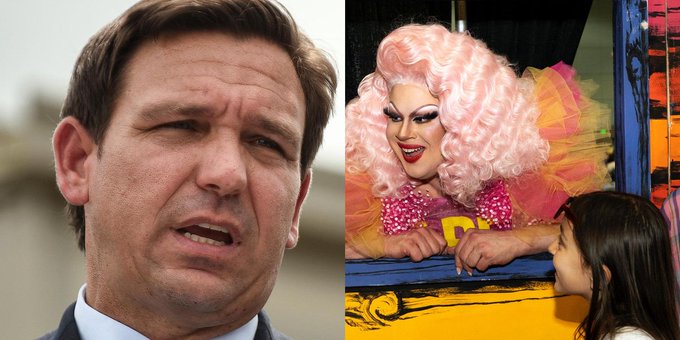 During a media meeting on Wednesday, DeSantis was questioned about proposed laws regarding children attending drag acts.

DeSantis stated that there are child protection statutes and laws against child endangerment on the books. DeSantis went on to say that his team was looking into the statute.

He went on to display frightening videos of youngsters pushing dollar bills into the panties of drag performers during a drag show performance at a pub in Dallas, Texas.

“Part of the reason why we fought the fight with Parents Rights in Education is because there’s a movement to interject these things like gender ideology in elementary schools even, and my view is, our school need to be teaching these kids to read and write and add and subtract, and do the things that are supposed to be done in school,” DeSantis proceeded.

Many people on social media were horrified by videos and photographs from a drag show in Dallas. Others on the left praised the incident, accusing opponents of intolerance and prejudice towards those who live in different ways.

“It used to be that kids would be off-limits. Used to be that everybody agreed with that. And now it just seems like there’s a concerted effort to be exposing kids more and more to things that are not age appropriate,” DeSantis remarked.

He ended by declaring that Florida has to be a family-friendly state, and he received a lot of applause from those in attendance.

Unless former President Donald Trump decides to run again, DeSantis is largely seen as the favorite for the Republican presidential nomination in 2024.