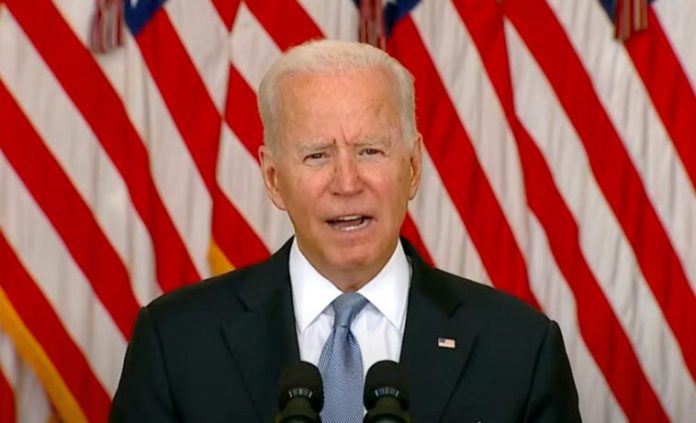 A new report by Jack Posobeic, a conservative journalist, says President Joe Biden isn’t sleeping well and wants him and his family to return to Delaware. He took a separate vacation over the weekend.

“Biden telling staff he wants to go back to Delaware. Hasn’t been sleeping well all this week. Thinks he will be more functional if he stays over at home in Wilmington,” Posobeic reported.

Just one hour after Posobiec had tweeted this message, WMAL News reported on Biden’s return to Wilmington, Delaware, for a long weekend.

“President Biden, who has spent the last few days traveling between the White House and Camp David, is scheduled to head to Delaware for a long weekend,” WMAL News tweeted. “That’s according to the FAA’s website.”

Biden will be home in Delaware when America most needs him.

On Wednesday afternoon, the Biden State Department delivered devastating news when they announced that they “cannot ensure safe passage” to the Kabul airport for Americans trapped in Afghanistan.

“U.S. government-provided flights are departing. U.S. citizens, LPRs, and their spouses and unmarried children (under age 21) should consider traveling to Hamid Karzai International Airport. You should plan to enter the airport at Camp Sullivan. From the HKIA Airport South Traffic Circle, head east for 1km and turn right on to Camp Sullivan. Please note that gates may change frequently and that we will provide updates as necessary.”

“THE UNITED STATES GOVERNMENT CANNOT ENSURE SAFE PASSAGE TO THE HAMID KARZAI INTERNATIONAL AIRPORT,”  The statement was concluded in all caps.

The US “cannot ensure safe passage” for trapped residents trying to flee to Hamid Karzai International Airport in Kabul, according to a State Department security alert released on Wednesday.

Thousands have attempted to escape Afghanistan through the international airport in Kabul since the Taliban seized power on Sunday, delaying many planes from leaving due to runway blockages. Several Afghans appeared to cling to the sides of departing planes in an attempt to flee the Taliban.

The security alert said that the embassy is prioritizing US citizens and legal permanent residents who have corresponding documentation and noted that it will assist Americans and LPRs without documents “to the best of our ability.”

The security alert does not mention what steps US officials are taking to help military translators, helpers, and local Afghans attempting to flee the country. US Rep. Andy Kim shared an email on Wednesday saying that any passports stored at the US embassy were destroyed while the embassy was evacuated. The passports likely belonged to Afghans attempting to get approved for visas.

“Visa and passport appointments at the Embassy have been canceled, and passports that were in the Embassy’s possession have been destroyed. Currently, it is not possible to provide any further visa services in Afghanistan,” Kim wrote.

The White House said Tuesday that the Taliban agreed to let civilians leave Afghanistan without incident or else would be met with “overwhelming force,” however there are reports from journalists in Kabul of gunfire, whippings, and attacks with sharp objects by Taliban members toward crowds outside of Kabul’s airport.