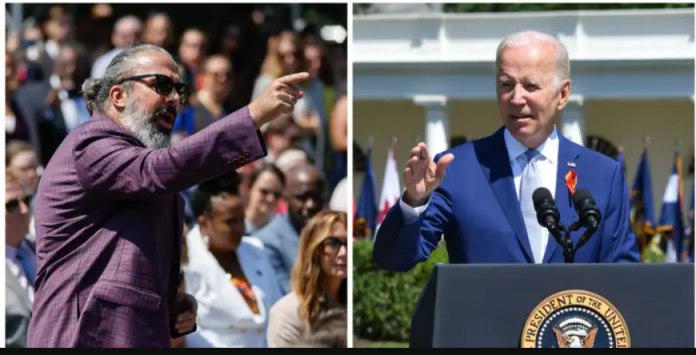 The father of Joaquin Oliver, a victim of a mass shooting, stopped President Biden on Monday during a celebration of the bipartisan gun control bill’s approval at the White House.

Oliver, whose son perished in the 2018 school massacre in Parkland, Florida, was finally dragged away from the gathering on the lawn of the White House.

When Biden paused to attempt to understand what Oliver was saying, he said, “Because make no mistake—”

“Sit down, you’ll hear what I have to say, if you think—”, Biden added.

Although most of Oliver’s remarks were lost on the audience, it seemed as though he was indicating that the law did not go far enough.

Oliver was then led from the gathering by members of the White House. Advocates from various gun violence prevention organizations, as well as victims’ survivors and families from all around the nation, attended the event.

“Because make no mistake about it, this legislation is real progress, but more has to be done,” said Biden.

According to insiders, Oliver and Biden had a meeting this year, and Oliver has recently had calls and meetings with senior White House officials.

Karine Jean-Pierre, the press secretary for the White House, misled reporters on Monday by claiming that Oliver and Biden had a meeting before to the event that he disrupted.

She refused to elaborate on what they discussed when asked about the substance of the chat and responded that she was not present for the meeting.

Oliver criticized the usage of the word “celebration” for Monday’s event earlier that day on CNN.

He suggested that stricter requirements should have been included in the law and that the bipartisan gun control package is insufficient.

Biden has come under fire for mostly remaining on the sidelines while a bipartisan group of senators worked to complete the plan. The gun control legislation has been criticized for not going as far as Democrats and supporters would have hoped.

Democrats and supporters are angry that the government isn’t doing enough to stop the next incident in the wake of the shooting at a Fourth of July parade in Highland Park, which occurred weeks after Biden signed the measure into law.