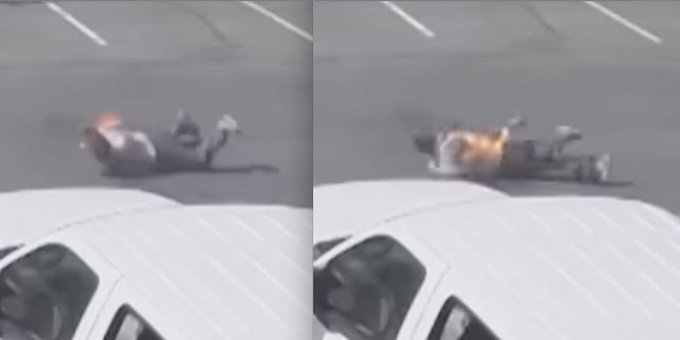 Over the weekend, a would-be gas thief paid a high price for his crime, catching fire while drilling a hole in a truck’s gas tank at a Salt Lake City company.

It was all recorded on security footage in broad daylight on a Saturday morning at Summit Fire & Security, which seemed fitting.

According to the station, the video shows the crook below a work truck on the side where the gas tank is located, with a white pickup vehicle parked next to the work truck.

Suddenly, the burglar appears in front of both trucks, his shirt on fire, rolling on the parking lot surface in an attempt to put out the flames.

The man rolled perhaps ten times until the flames died out, then discarded his burnt clothing and dashed inside the white pickup vehicle that the driver had driven forward to pick him up.

The screenshot below shows what looks to be a red gas can left beneath the truck, with smoke billowing from the bottom and the poor would-be burglar preparing to take off his shirt.

According to Branch Manager Travis Mills, the thief attempted to siphon gas out of it but was unsuccessful. So he decided to drill the gas tank, and he caught fire as a result. He’s leaving because if there was more gas in there than a gallon, this thing would have exploded. It’s unfortunate since things are bad for many people, but the $5 he would have saved for the man’s injuries isn’t worth it.

The vehicle has been taken off the road owing to a broken petrol tank, and repairing it will be expensive if one can be obtained.