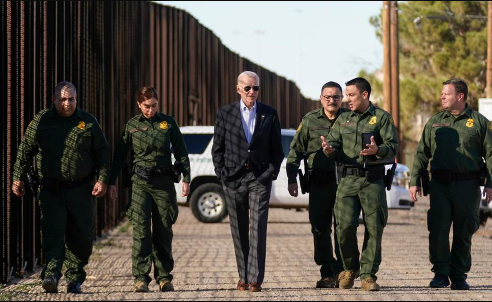 President Joe Biden has made it simple for unauthorized immigrants to enter the US across the southern border. That, however, was insufficient. While they wait their turn to enter the United States, illegal immigrants can book appointments at the border according to a new smartphone app launched by Biden’s Department of Homeland Security (DHS).

The DHS’s recent addition to the CBP One app will make it easier for criminals, drug dealers, and sex traffickers to enter the US.

They only have to enter the app and set up a meeting with CBP officers at the US-Mexico border.

“Through a series of questions, CBP One will guide users to provide a live facial photograph and submit advance information that an undocumented noncitizen would normally provide during their inspection at a port of entry. Additionally, users must attest that when scheduling an appointment, they, or a spouse or child accompanying them, meet specific vulnerability criteria for which they seek a humanitarian exception,” a CBP statement reads.

A CBP agent will decide if the illegal immigrants meet the requirements to be admitted to the United States after they show up at the specified location for their appointment. Without requiring any sort of official authorization, anyone can submit their information through the app.

A Biden Administration scheme will allow up to 30,000 Cubans, Haitians, Nicaraguans, and Venezuelans to fly into the US each month provided American residents or other people in the US with legal status agree to sponsor them. This app alone will allow thousands of people to enter the US.

“Instead of trying to stop an unprecedented flow of migrants, they’re encouraging even more fraudulent asylum claims, while finding innovative ways to process them en masse. If they wanted to actually end the crisis, the solution is simple: enforce our laws, don’t create an app to make circumventing them even easier,” RJ Hauman, a member of the Federation for the American Immigration Reform stated.

More than five million immigrants have entered the country illegally since Biden took office. He didn’t decide to listen to the American people for once and pay a visit to the southern border for the first time since assuming office until the prospect of another four years hung over his head. He did not, however, make it to the most crucial locations in El Paso, Texas, and very little to nothing was accomplished.