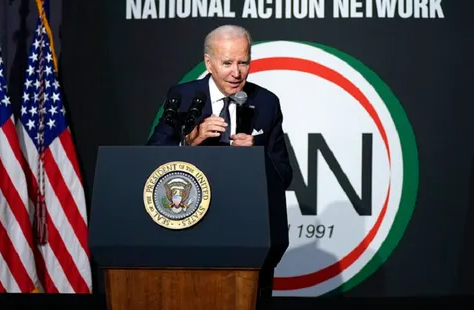 On Monday, President Biden stated that individuals who contend that assault rifles are needed to fight the government need a considerably larger arsenal to have a chance.

“I love my right-wing friends who talk about the tree of liberty is water of the blood of patriots. If you need to work about taking on the federal government, you need some F-15s. You don’t need an AR-15.”

The statement said by Biden dates back to Thomas Jefferson, who was the primary author of the Declaration of Independence and the third president of the United States. Jefferson remarked in a letter, “The tree of liberty must be refreshed from time to time with the blood of patriots & tyrants.”

Assault weapons, according to the president, have no “social redeeming value.”

He also made the untrue notion that the Second Amendment has always been subject to restrictions.

“The Second Amendment, from the day it was passed, limited the type of people who could own a gun and what type of weapon you could own. You couldn’t buy a cannon. The point is that there has always been the ability to limit — rationally limit — the type of weapon that can be owned and who can own it,” Biden continued.

When Biden has made these allegations repeatedly over the previous few years, they have been examined and determined to be untrue. The first federal gun control law was adopted in 1934.