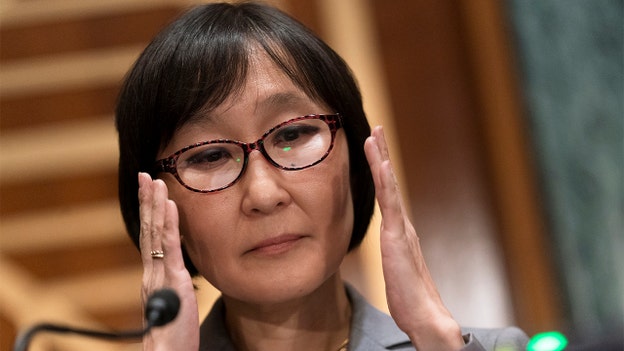 Five senator Democrats said that they would oppose President Biden’s nominee to head the Office of the Comptroller of the Currency.

Omarova would not be able to be confirmed in an evenly divided Senate without the support of all Democrats.

“Saule Omarova is eminently qualified for this position,” the official added. “She has been treated unfairly since her nomination with unacceptable red-baiting from Republicans like it’s the McCarthy era.”

Senator Republicans are going after Omarova who was born in Kazakhstan’s former Soviet republic, for a past paper she wrote while at Moscow State University, saying it raises questions about her support for capitalism.

“She wants to nationalize the banking system, put in place price controls, create a command and control economy where the government allocates resources explicitly, instead of free men and women making their own decisions about the goods and services they want to buy and sell in an open market,” Sen. Pat Toomey (Pa.), the top Republican on the Banking panel, said at her nomination hearing. “These are exactly the kind of socialist ideas that have failed everywhere in the world they’ve been tried.”

Omarova was called “comrade” by other Republicans while she was being questioned during the hearing.

Democrats claim that Republicans want to portray Omarova as a communist sympathizer. Brown says the attack is a “cruelty” no one should experience.

“I grew up without knowing half of my family. My grandmother herself escaped death twice under the Stalin regime,” Omarova said at the hearing. “This is what seared in my mind. That’s who I am.”