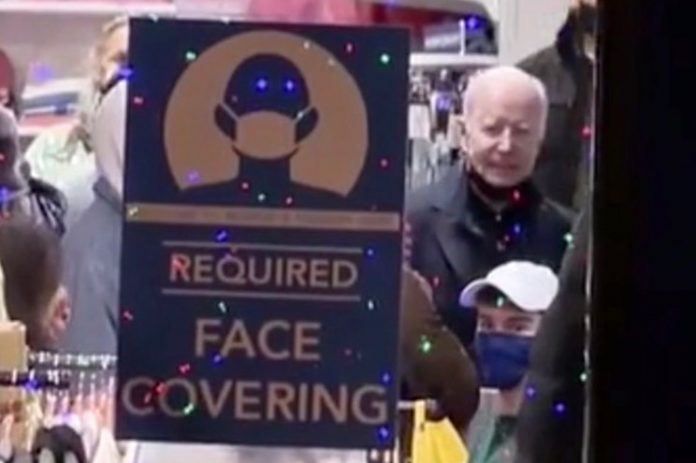 Joe Biden, President of the United States, has repeatedly called for Americans to mask up. But he was caught in Nantucket, violating face-covering regulations on Saturday.

Biden is seen wearing a black mask around the neck. This leaves his nose and mouth exposed in Murray’s Toggery Shop, on the island. Despite a sign warning shoppers that “REQUIRED FACE COVERING” are posted on the door.

According to photos and reports, he left the shop around 4:45 p.m. on Saturday with a drink in his hand.

The policy of the Nantucket clothing and souvenir shop on Main Street is consistent with the island’s mask mandate. This mandate was reportedly reimposed by the local Board of Health earlier this month in response to an increase in COVID-19 in the sewer system.

Biden went to a maskless store because he celebrated Thanksgiving at the home of David Rubinstein, a private equity billionaire in Nantucket. There, he attended a tree lighting ceremony and his motorcade received a middle finger from an elderly man on a porch.

In September, the president received a booster. In August called for a three-month nationwide mask mandate, and earlier this year stressed that face-covering will be necessary through 2021.

“You know that wearing this mask through the next year here can save lives — a significant number of lives,” he said in February.

Biden’s Thanksgiving weekend shop tour was not the first time that he has broken mask-wearing regulations. In October, Biden was caught violating Washington DC’s indoor face-covering mandate in Fiola Mare in Georgetown, where he carried a blue surgical mask in his hands while not eating.