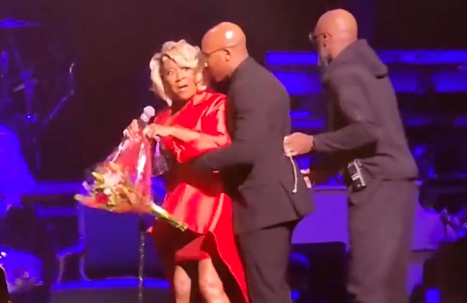 Patti LaBelle was rushed off stage during the Milwaukee show Saturday evening after the theater was hit with a bomb threat.

LaBelle was holding a bouquet of flowers and addressing the audience when the frightening incident at the Riverside Theater was caught on camera. Two men rushed onto the stage and seized LaBelle’s microphone stand.

One of the men pulls LaBelle by the arm and makes her drop the bouquet as she cries. Another man runs from stage right and grabs LaBelle’s free arm.

As the men lead LaBelle offstage and the musicians leave their instruments to chase after the Godmother of Soul, the audience’s initial laughter gradually changes to puzzled coos.

Authorities were forced to evacuate everyone from the theater and are investigating the threat, according to a police release shared Patrons made to wait on the street for an update on what’s happening  have been captured in another video that was shot outside the theater.