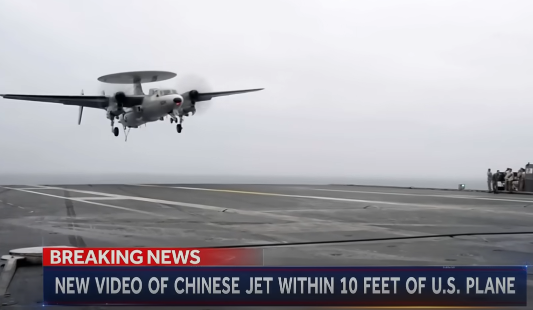 Last week, a Chinese military plane in the disputed South China Sea approached within 10 feet of a US air force aircraft, forcing it to do evasive maneuvers to avoid a collision in international airspace, the US military claimed on Thursday.

The close call came as a result of what the US has described as a recent pattern of more risky activity by Chinese military aircraft.

The incident, involving a US air force RC-135 and a Chinese Navy J-11 fighter jet, happened on December 21, according to a statement from the US military.

We anticipate safe and legal use of international airspace by all nations in the Indo-Pacific region, it was said.

According to a different U.S. official, the United States has brought up the problem with the Chinese government.

A request for comment from the Chinese embassy in Washington, DC, did not receive a prompt response.

Watch A Quick Video On The Matter:

China has previously argued that it is not in the interests of world peace for the US to send ships and aircraft into the South China Sea.

Huge portions of the South China Sea that are claimed by China overlap with the exclusive economic zones of the Philippines, Vietnam, Malaysia, Brunei, Indonesia, and Malaysia.

Every year, trillions of dollars worth of trade pass through the waterway, which is also home to abundant gas deposits and fishing grounds.

U.S. Defense Secretary Lloyd Austin brought up the need for better crisis communications during a meeting with his Chinese counterpart in November. He also brought up what he called unsafe activity by Chinese military aircraft.

Despite the hostilities between the two countries, U.S. military officials have long pushed to keep lines of communication open with their Chinese counterparts in order to reduce the likelihood of future flare-ups or deal with any mishaps.

An Australian military surveillance plane was riskily intercepted by a Chinese fighter jet in the South China Sea region in May, according to a statement from Australia’s defense department in June.

Australia said the Chinese jet flew close in front of the RAAF aircraft and released a “bundle of chaff” containing small pieces of aluminum that were ingested into the Australian aircraft’s engine.

In June, the military of Canada said that Chinese warplanes had harassed its patrol aircraft as they were keeping an eye on North Korea’s attempts to evade sanctions, at times causing Canadian aircraft to deviate from their flight paths.

The world’s two largest economies have been at odds with one another on a variety of issues, including Taiwan, China’s record on human rights, and its military activities in the South China Sea. Relations between the two countries have been difficult.

China was furious with the United States because it perceived Speaker of the House Nancy Pelosi’s visit to Taiwan in August as an attempt to meddle in China’s internal affairs. After that, China began conducting military exercises close to the island.

Despite the absence of official diplomatic ties, the United States is required by law to arm Taiwan with the ability to defend itself.