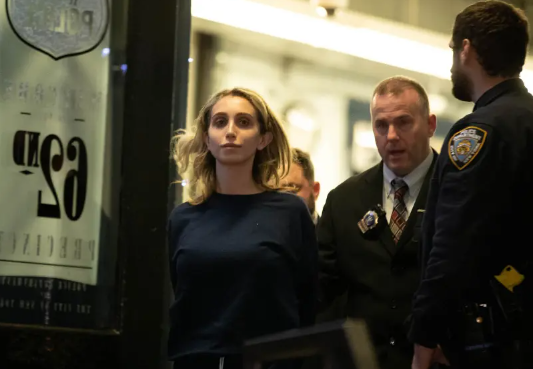 As she was being led out of an NYPD station house on Thursday night, the 22-year-old trans daughter accused of killing her father inside the family’s Brooklyn apartment smiled for the cameras.

After first believing that her father, Carlo Secondino, had been stabbed to death during an early morning house invasion at their Bensonhurst residence, Nikki Secondino was charged with murder as well as other felonies.

Earlier on Thursday, sources informed The Post that Nikki was suspected of fabricating the burglary tale in order to hide her own vicious act.

The story gradually unraveled, however, and the alleged murderer was also charged with attempted murder and criminal possession of a weapon in connection with the terrible attack in which her 19-year-old sister was also stabbed.

The younger sister was rushed in critical condition to Maimonides Hospital.

Thursday night, Nikki grinned while ignoring questions from reporters as they followed her out of the 62nd Precinct in Brooklyn.

Nikki Secondino charged with killing NYC dad Carlo after home invasion claims https://t.co/HVF4VhK7Qj via @nypmetro
The 22-year-old trans daughter of a Brooklyn man who was fatally stabbed has been charged with his murder

After the murder, a neighbor of the Secondinos claimed to have overheard Nikki talking on the phone in the hallway, saying the family had been robbed by intruders who also stabbed them.

The 61-year-old father was killed, and both daughters were injured, by two thieves who initially said they had broken into the family’s house on 17th Avenue near 82nd Street and demanded money from a safe.

The hands of Nikki were slashed, and she was carried to the hospital in stable condition, according to the police.

Her father supported her decision to come out as transgender, according to Yadira Gomez, co-owner of Mike’s Diner, where Secondino worked as a deliveryman.