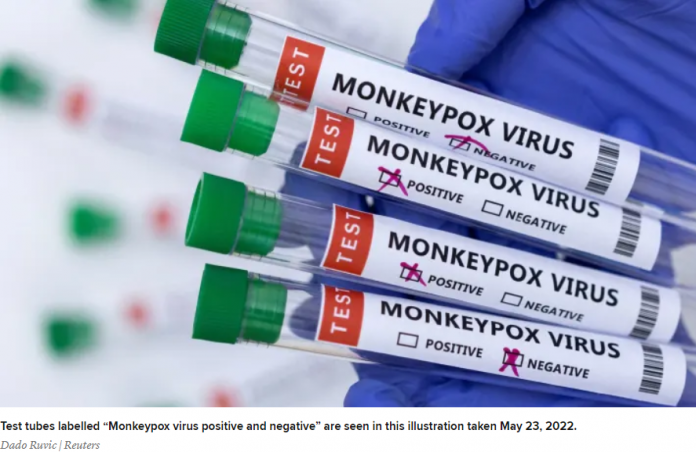 The Centers for Disease Control and Prevention in the United States has updated its monkeypox advice, advising individuals to take additional measures as the number of cases worldwide approaches 1,000.

On Monday, the CDC raised its alert to level 2, urging individuals to take extra care to stop the outbreak from spreading to 29 non endemic nations in the last month. The highest degree of alert, level 3, advises against unnecessary travel.

While the danger to the general population is still minimal, the increased notice recommends people to avoid close contact with sick individuals, such as those with skin or genital sores, as well as sick or dead animals. It also advises anyone who are experiencing signs of the virus, such as an unexplained skin rash or lesions, to avoid contact with others and seek medical advice.

Travelers should use face masks to help prevent the spread of monkeypox, according to the CDC’s website, which was later deleted.

Rashes, fever, headaches, muscular aching, swelling, and back pain are all signs of monkeypox. Monkeypox is an uncommon disease caused by infection with the monkeypox virus.

It is usually prevalent in Central and West African countries, but a recent epidemic in North America, Europe, and Australia has perplexed doctors and raised concerns about community spread.

According to the CDC, 1,019 confirmed and probable monkeypox cases had been recorded in 29 countries as of Monday. The U.K. With 302 suspected and confirmed illnesses, it has by far the highest instances. Spain comes in second with 198 points, followed by Portugal with 153 and Canada with 80.

Just lately, it was considered that the current outbreak was caused by a West African strain of the virus, which causes less severe sickness than other varieties and has a 1% mortality rate.

However, the CDC said on Friday that at least two genetically different monkeypox types are presently circulating in the United States, further confusing health officials. In total, 30 instances of the virus have been documented in the United States.