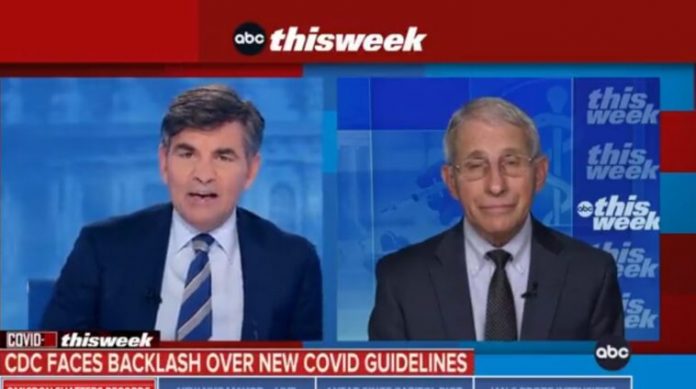 The Centers for Disease Control and Prevention (CDC) may revise its quarantine and testing protocols for those who test positive for COVID-19 or have been in close contact with someone who has tested positive, according to Dr. Anthony Fauci.

Fauci appeared on ABC’s “This Week” with anchor George Stephanopoulos after the CDC reduced isolation standards from ten to five days, citing shifting science and referring to economic concerns – a matter of public policy rather than scientific counsel.

Dr. Anthony Fauci tells @GStephanopoulos that the CDC is considering amending the isolation guidance for asymptomatic patients to include testing.

“The CDC is very well aware that there has been some pushback about that.” https://t.co/AA3csRTGyE pic.twitter.com/P1WkSNrdFS

Fauci added: “Well, let’s talk about the first principle, George. The idea of if a person is without symptoms and infected, that they need to be isolated for five days. Normally that would be ten days. The CDC decided that they would cut that down to five days if the person remains asymptomatic so long as when they do go out in the second five days of that ten-day period, back to work or back into society, that they diligently wear a mask.”

Walensky stated “Of course there is this tail end period of time in the last five days where we are asking you to mask. But the other thing we were looking at is the epidemiology here. We are seeing and expecting even more cases of this Omicron variant. Many of those cases are mildly symptomatic, if not asymptomatic.”

Since the start of the Covid-19 epidemic, public health authorities have been dictating federal and state policies. Only legislatures, not unelected bureaucrats, have such authority under the US Constitution and state constitutions.