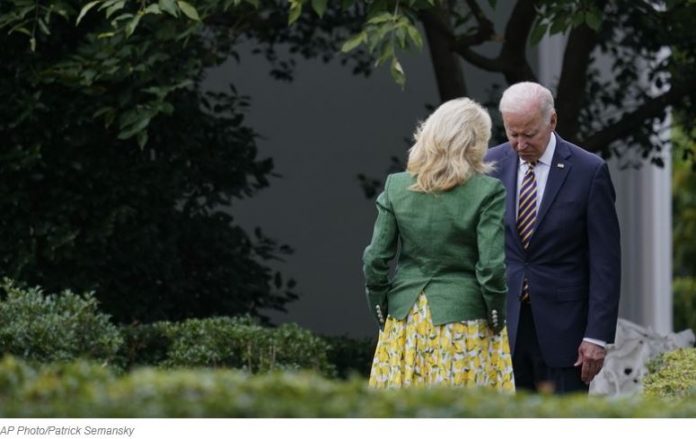 After the midterm elections, a countdown to the moment when the Democrats start being open about Joe Biden’s problems and toss him to the side will probably begin. Of course, the fact that they lack suitable replacements for him is their bigger issue. His second-in-charge, Kamala Harris, also struggles to make meaningful statements and complete tasks without failing. She shares Joe Biden’s lack of popularity. So it doesn’t really benefit them.

On Monday, he was back at it, struggling to get through the day without encountering any new problems.

Dale Haney, the Chief White House groundskeeper, has celebrated 50 years of service. Besides keeping the grounds in shape, he’s also walked the first family’s dogs for years. President Biden and the First Lady planted a tree in his honor today. pic.twitter.com/L6WURXFPmb

Here he was once again addressing Kamala Harris as president while also wishing her a “Happy Birthday.”

Biden’s issues on Monday weren’t limited to that.

Biden and his wife attended a ceremony honoring Dale Haney, the groundskeeper at the White House for the past 50 years. They assisted in planting an elm tree on the south grounds in honor of Haney’s accomplishment because that is a pretty remarkable effort.

Keep in mind that the grounds is just within the confines of the White House.   Nevertheless, following the recognition, he continued to get confused and needed to be instructed to return to the White House, which was directly behind him.

His wife Jill appears to have given up on him because she just started leaving without him. You have to question what’s going on and how someone could treat someone like that if they loved them, especially given his problems.

Biden starts wandering in the wrong direction, is directed back to the WH pic.twitter.com/uYZjqsMQDJ

But what he says there is actually quite alarming, “I notice how much freedom I have.”

He seemed to have just admitted how much he is being controlled there. When people see things like this, even our enemies can see Biden’s issues. Each day is becoming worse. And if something isn’t done about it, we’re going to have a lot of problems.