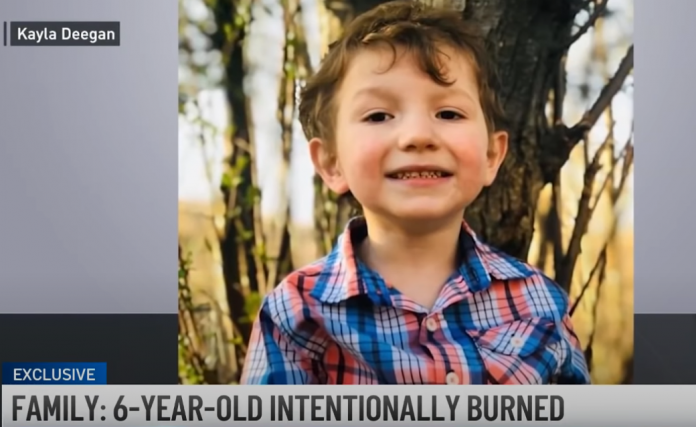 According to the article, a 6-year-old Connecticut kid was seriously burnt when a juvenile neighbor doused a tennis ball with gasoline before setting it on fire and throwing it at the child’s face.

On Sunday, Dominick Krankall was playing in his Bridgeport backyard when he was tormented by an 8-year-old kid who took gasoline and a lighter from the shed before luring the youngster to approach him.

“The bully yelled his name and enticed him over around the corner as soon as he stepped down the stairs.” He came back around the corner shouting, “Mommy, they lit me on fire!” in a matter of seconds. They set fire to me! ,” Kayla Deegan, the boy’s sister, stated.

Kayla said the horrific conduct was planned and that the neighbor had previously tormented her brother.

She continued narrating what happened saying, “What he did was pour gasoline on a tennis ball, took a lighter, lit it up and just chucked it right at my brother’s face and then ran away from him and watched him burn. Two months ago under the bully’s mother’s supervision, he was pushed into a wall and fell to the floor. And again, the mother refuses to admit her kid did it.”

Dominick was transported to Bridgeport Hospital’s burn unit, where he was healing.

To assist the child’s recuperation, the family created a GoFundMe page. As of Wednesday night, they had collected $162,000 in contributions.