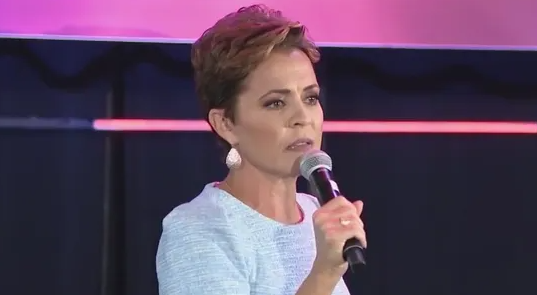 A package containing a strange white liquid was purportedly opened by a campaign employee for Republican Kari Lake, who is running for governor of Arizona. The substance was delivered to Lake’s campaign headquarters in Phoenix.

They said that a member of the Kari Lake campaign crew inspected an envelope that was brought to their office and discovered a suspicious-looking white powder inside. It was one of two envelopes that authorities seized and forwarded to experts at Quantico for analysis; they are expecting further information. He continued by saying that the employee is currently being treated by a doctor.

Sgt. Phil Krynsky of the Phoenix Police Department said, “Officers responded to a found property call at an office building near 40th St. and Camelback Road. When officers arrived, they learned there were suspicious items located inside the mail. Additional resources responded to collect the items and secure the area. There have been no reports of injury and the investigation remains active.”

Two days before the 2022 midterm elections, Duncan noted that Lake’s campaign headquarters is still closed to personnel due to an ongoing investigation and stated they hope that law enforcement will wrap up their probe as soon as possible.

They told the public that they are treating the security threat extremely seriously and expressed gratitude for the assistance provided by the Phoenix Police Department, the FBI, first responders, the bomb squad, and hazmat workers.

“In the meantime, know that our resolve has never been higher and we cannot be intimidated. We continue to push full speed ahead to win this election on Tuesday.”