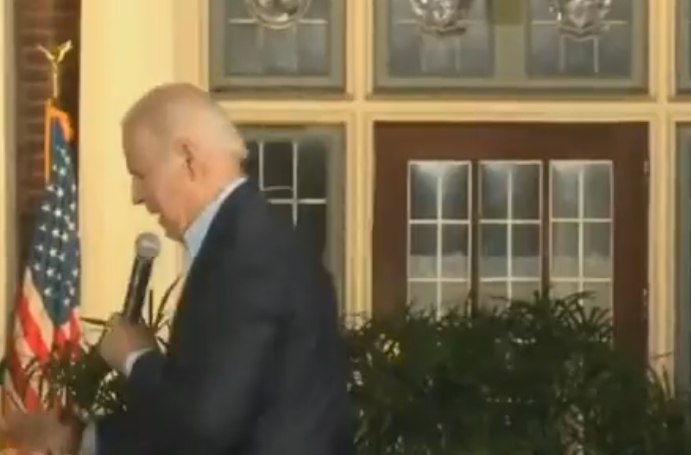 What happened? was the key query following a gathering that President Joe Biden and New York Governor Kathy Hochul hosted on Sunday night.

Following the dramatic increase in the polls of Republican candidate Lee Zeldin, Democrats have been racing to Hochul’s aid. The deep blue state of New York is not meant to be involved. The fact that it is so close doesn’t bode well for the hopes of the Democrats on election night.

There doesn’t seem to have been anything in his way, even though we can’t see the stage. Later, he moves through the same area without difficulty. When he shouts “it’s black” at that precise time, he appears to be truly surprised.

“Great,” one Twitter user responded, “Now we’re getting 6 more weeks of recession. It’s definitely not a good thing that the President of the United States has become a running joke because of his senility, but we can at least have some fun while we wait.

In connection with it, Biden brought up his oft-used remark about “deer in kevlar vests.” He must not have any handlers who are willing to tell him how foolish he appears.

The term, “another gun” is working here. Hunting rifles’ muzzle velocities are generally comparable to that of an AR-15, he can’t be referring to them. Larger calibers will hit with more mass and be slightly slower, but not by five times as much. Depending on the round and barrel length, even handguns only move more slowly by two to three times. What precisely is Biden trying to say here? When discussing firearms, velocity is merely one factor in lethality.

The right to own a gun and go hunting was assumed when the Bill of Rights was written. The right to keep and bear weapons was more than that. It was about guaranteeing that people could possess firearms, band together, and defend themselves, including from an oppressive government. The entire “deer in kevlar vests” controversy is absurdly pointless and unimportant. In addition, there are considerably superior alternatives to an AR-15 if someone wants to pierce body armor.

Aside from his foolishness and senility, the most important part of Biden’s speech was when he was really coherent. Just before the mid-term elections, the president said directly in response to a protester, “There is no more drilling.”