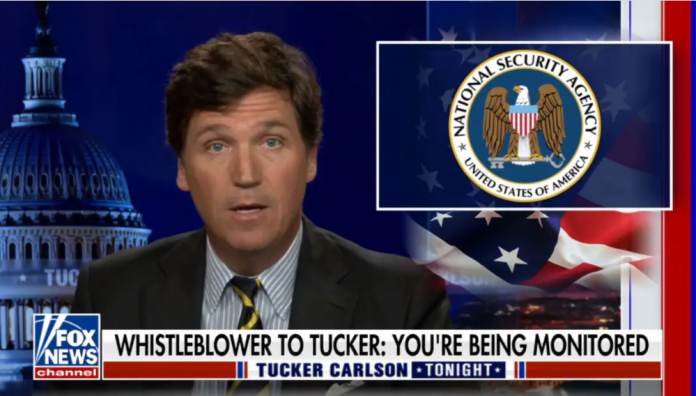 Fox News host Tucker Carlson reported Monday that Tucker Carlson was given evidence by a whistleblower that the NSA had spyed on his communications. He repeated to Carlson things that were about an upcoming story that was only in Carlson’s texts and emails.

“The Biden administration is spying on us. Carlson stated that he had confirmed this to his audience.

Tucker Carlson claimed that a whistleblower informed him that he was being spied upon by the NSA. He filed a FOIA request to obtain information which will help with a follow up story.

Most media reported that Carlson had dropped a bombshell claim on Monday night against the U.S. government, declaring that a whistleblower had informed him that the National Security Agency was actively spying on his communications in an effort to take his show off the air. However, the Democrat media allies just mocked Carlson.

It might be because Carlson is exposing the big lie from the Biden administration about the amount of crime by White Supremacists.

FBI agents told @TuckerCarlson that Joe Biden and AG Garland’ “White supremacy threat“ is absurd. There’s been so few white supremacy crimes that the FBI actually thought about closing down that department because there was nothing for them to do. pic.twitter.com/RwBegygIpV

“The whistleblower, who is in a position to know, repeated back to us information about a story that we are working on, that could have only come directly from my texts and emails. There’s no other possible source for that information, period. The NSA captured that information without our knowledge, and did it for political reasons,” Carlson stated.

Breaking: Tucker Carlson accuses Biden administration of "spying" on him in an attempt to take his show off the air.
Says a whistleblower told his team the NSA is surveiling their electronic communications.pic.twitter.com/qEp5HXuOVB

Carlson stated that it was illegal for the NSA spy on American citizens. It is a crime. It’s not a third world country. These things should never happen in America.

Carlson claimed that the NSA gathered information about his story without our knowledge and used it for political purposes.

He continued, “The Biden administration spy on us.” “We have confirmed this.”

Carlson stated that they had filed a Freedom of Information Act request to obtain all information about their show. They also reached out to the FBI’s and NSA press offices. Fox News host Carlson called for transparency within intelligence agencies.

He added that spying on journalists of opposition is against democracy. “If they do it to us, and they are certainly doing it again to us, then they almost certainly are doing it for others.” This is alarming and must be stopped immediately.