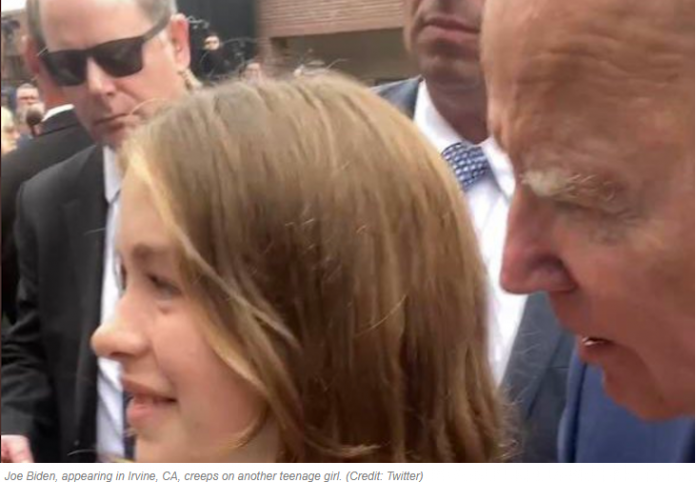 There are a few things to notice in the clip, and none of them are appropriate for a man, much less the President of the United States.

Biden can be seen leaning in to smell the teenage girl’s hair before grabbing her shoulder. Over the years, he has been caught doing that numerous times, and no convincing justification for his actions has ever been provided. You’d think the news media, which purports to be interested in things like this, would be curious, but apparently not.

After giving her a whiff, he grips her shoulder against her will. Any normal, fully-sentient man would shun such a bizarre action. That’s not cute, and it’s not just “ole Joe,” it’s incredibly unsettling and scary. She turns around and tilts her head away, indicating that she finds his caressing to be unsettling.

President Joe Biden grabs a young girl by the shoulder and tells her “no serious guys till your 30” as she looks back appearing uncomfortable, secret service appears to try to stop me from filming it after Biden spoke @ Irvine Valley Community College | @TPUSA @FrontlinesShow pic.twitter.com/BemRybWdBI

As if the invasion’s physical implications weren’t offensive enough, Biden continues by advising her to avoid meaningful relationships until she is 30. One of the females in the picture asks him to repeat himself, and she then sarcastically replies, “I’ll keep that in mind,” indicating that she is truly astonished by his statement.

He’s used that statement or a version of it several times before, just for context. You might remember a recent outburst where he said to a woman in the crowd during a speech that when they first met, “she was 12, I was 30.”

Boundaries should only be observed verbally and physically by normal males. The sniffing, stroking, and sexually suggestive remarks are strange at best and incredibly disclosing at worst.