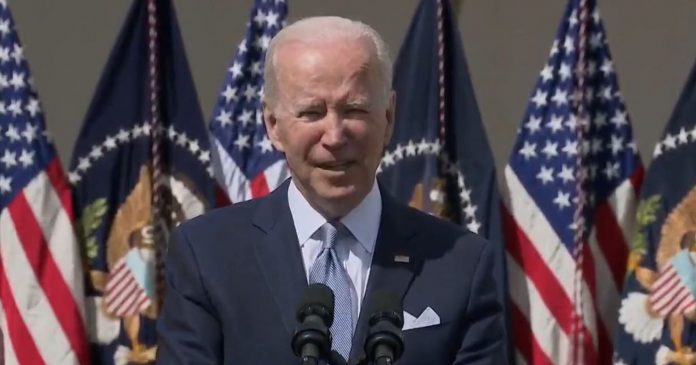 On Monday, President Joe Biden made a big announcement at the White House Rose Garden, announcing his choice for ‘AFT’ [really, ATF] director: U.S. Steve Dettelbach is a lawyer.

Biden got things started by mispronouncing the agency’s acronym, the Bureau of Alcohol, Tobacco, Firearms, and Explosives, or ATF. One Bidenesque sentence is so nonsensical that it’s difficult to understand what he’s saying.

At an event about firearms, Biden confuses the ATF with the AFT pic.twitter.com/8BO9EqtmCu

Biden stumbled and then blurted something about the cigarette industry being impervious to “prostitution,” before swiftly correcting himself.

President Joe Biden appears to be unaware that under Covid, his government granted blanket protection to a number of pharmaceutical firms.

A president who can hardly speak any sentence. pic.twitter.com/Td32tc43q0

But it was when Biden claimed he intended to ‘recruit’ his nominee’s 16-year-old son that the most alarming aspect occurred.

During his speech, Biden campaigned for gun regulation, especially stating that his government plans to outlaw ghost firearms.  He even brought one with him to the occasion.

Despite pushing on his ATF Director to press for tougher gun control, this isn’t the first time Biden has gotten the name of the agency in charge of enforcing such laws muddled up.

“Finally, the major agency enforcing gun regulations, the Bureau of Alcohol, Tobacco, and Firearms, hasn’t had a permanent director since 2015,” Biden bumbled. “Today, I am honored to nominate David Chipman for the position of AFT Director. “David is well-versed in the AFT,” Biden noted.

After receiving criticism for his nominee’s views on gun regulation, the White House withdrew Chipman’s candidacy in September.

Joe Biden is now showing the crowd at the White House a "ghost gun." pic.twitter.com/Z2VydpihGC

Dettelbach, Biden’s most recent choice, faces a difficult confirmation process. Due to the political difficulty of confirming directors who advocate tougher gun control measures, the ATF has functioned under acting directors since 2015.