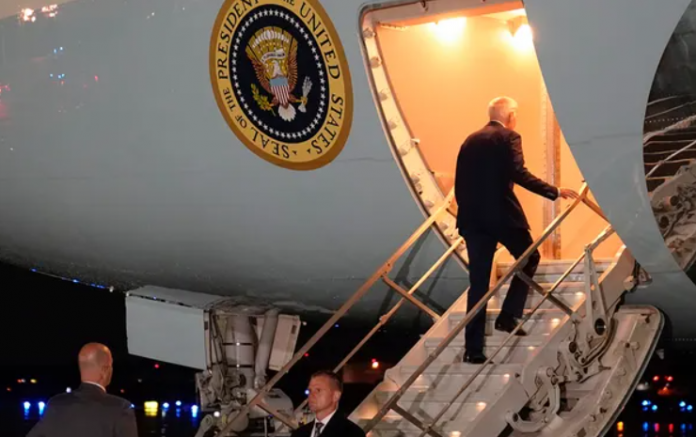 According to a leading foreign policy expert, President Biden’s foreign trip has succeeded in giving the impression that America is weak as he moves on to Jeddah, Saudi Arabia, following an embarrassing stop in Israel and with the Palestinians.

James Jay Carafano, vice president of the Heritage Foundation, stated on “The Story with Martha MacCallum” that the trip has been incorrectly characterized as a “nothingburger” pointing out the lack of concrete results for the US despite numerous occasions when regional leaders made Biden and, by extension, the US, look bad.

All of this is happening while competitor Russia wants to trade weapons with Iran, according to Carafano.

“We’ve already seen the Israel piece, which literally was nothing. And the expectations here are zero: But when you put this in the bigger context: Putin is going to visit Iran. Iran’s going to sell UAVs to Russia. And the U.S. government publicly acknowledges that Iran is trying to kill former U.S. officials,” he remarked.

While this was going on, the Palestinians humiliated the US president by outlining a long list of requirements before allowing him to return to discuss a two-state solution with Israel. The Saudis, the Palestinians, and the Iranians are all making the president seem bad.

When Biden praised the Trump-forged Abraham Accords during his visit to Israel, Carafano referred to them as meaningless platitudes.

Carafano cited Democrats’ desire to sever ties between the US and Saudi Arabia, Israel, Egypt, Turkey, and other countries, and claimed that Biden supported the rhetoric while knowing it to be false.

Despite this, he claimed that Biden’s visit to these partners and allies this week with his hat in hand was the most foreseeably event.

Along with experts like Carafano, Democrats have started publicly criticizing Biden’s actions during the trip, with one New Jersey Democrat running for the House stating he is uncomfortable with the president’s fist-bumping of Saudi Prince Mohammed bin Salman.