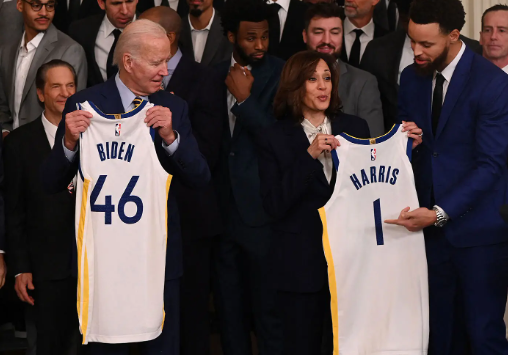 Years after his vice president gave the nation the proper pronunciation of “Kamala” Harris, President Biden seems to have forgotten how to say it on Tuesday.

At a White House ceremony honoring the NBA champion Golden State Warriors, Biden said,“As Kamala said, we’re all closely monitoring the storms, the floods, the landslides all across California,” pronouncing his second in command’s name as “CAM-a-la” rather than the proper “COMMA-la.”

As he gets ready to start his reelection campaign in 2024, Biden, who is 80, is the oldest president in history, and his mental sharpness is frequently questioned. He merely stumbles and stutters, according to his defenders.

She successfully taught a large portion of the population how to say “Kamala” before or during the 2020 election campaign. Harris’ name was influenced by her mother’s South Indian ancestry.

“My name is pronounced ‘comma-la,’ like the punctuation mark. It means ‘lotus flower,’ which is a symbol of significance in Indian culture,” Harris stated this in a 2019 memoir.

While he continued to avoid inquiries concerning the special counsel inquiry into his alleged handling of classified documents, Biden’s memory loss was momentary on Tuesday. At one point, he correctly pronounced Harris’s first name and requested Harris to accompany him out of the room.

At least six times, including the most recently on January 5, Biden mistakenly referred to Harris, 58, as president.

If Biden is unable to finish his term, Harris would become the first woman to hold the position.