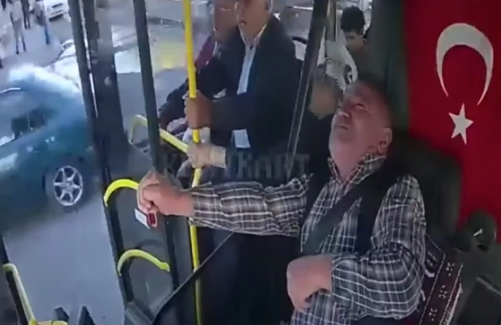 Startling video from Turkey captures the moment a bus driver had a heart attack while carrying people, leading to a serious collision.

A security camera inside the bus captured the incident, which happened in the city of Sivas in late September.

Driver Ömer Odabaşı may be seen acting normally while coming to a complete stop on camera before suddenly glancing up with a hurt expression on his face.

As the bus rolls forward as the driver is unable to control the steering, passengers watch in fear as Odabaş hits the gas pedal while ostensibly experiencing a medical emergency.

One of the female passengers is thrown forward toward the front of the bus as the driver plows through traffic and collides with cars, making an unsettling guttural noise in the process.

The driver continues to have strong convulsions and briefly has seizures even after the collision.

7 people were reportedly hurt in the event, according to reports from the Turkish news website Yeni Afak, which published photos of the aftermath of the pandemonium caused by the uncontrolled bus.

Governor of Sivas Ylmaz Imşek asserted that no significant injuries were reported and that the driver, who had likely suffered a heart attack, was given medical attention on the site.

Driver Ömer Odabaş’ sudden, seemingly unprovoked heart attack appears to reflect a pattern seen around the world since the introduction of Covid-19 vaccinations, many of which are known to induce blood clots and heart inflammation. It is unknown what caused Ömer Odabaş’ medical emergency.