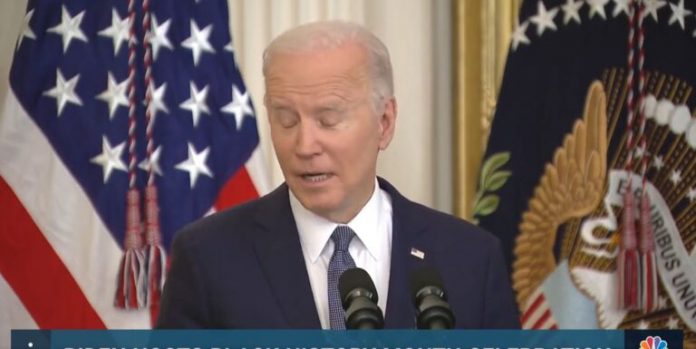 President Joe Biden is happy with his Supreme Court nominee, presumably since she is a black woman. Unfortunately, Biden doesn’t appear to understand his choice, starting with her name.

“Of course, in the nomination of Ketanji, we see another first, I guess you saw Justice Brown, uh, Justice Brown Jackson, who is currently on the Circuit Court of Appeals.”

Ketanji Brown Jackson would be her name. She is a 51-year-old Harvard alumna who was just confirmed as a federal appeals judge in Washington, D.C. The Circuit Court of Appeals is a federal court that hears appeals from lower courts

On the court circuit, the nation’s likely first female black justice has a long history of anti-Trump opinions. She rejected Trump’s attempt to prevent the publication of records from his White House relating to the events of January 6, 2021.

She rejected the Trump administration’s attempt to use executive privilege to prevent former White House counsel Don McGahn from testifying before Congress, noting that presidents are not kings.

A higher court overturned several of Jackson’s rulings, including those on Trump’s attempt to speed up deportations and executive orders restricting government unions’ power, according to Politico. Jackson was also the judge who sentenced the Pizzagate conspiracy theorist who shot inside a D.C. restaurant. from a restaurant to a four-year prison sentence

Jackson is a favorite of the Congressional Black Caucus, and Senators Lindsey Graham, Susan Collins, and Lisa Murkowski confirmed her to a D.C. position earlier this year. Last year, he was appointed to the Circuit Court of Appeals. As a result, she will almost certainly breeze into the Supreme Court without a struggle. Even if President Biden has never heard of her.