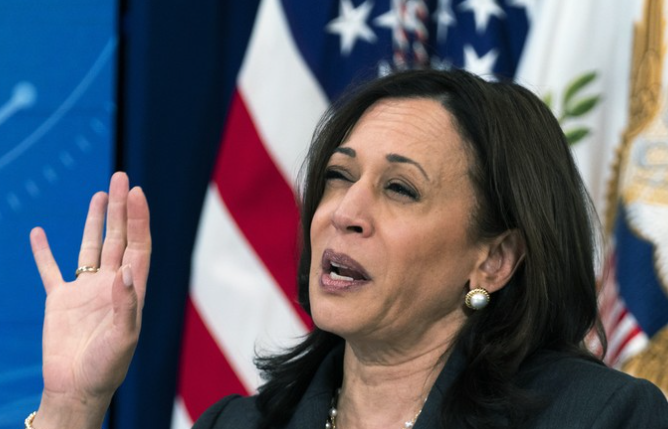 On “Late Night” on Monday, Seth Myers and Kamala Harris both made appearances.

Seth Meyers: “Kamala Harris will be here! How about that everybody? And we’re very excited about her.”

I think it’s safe to say that’s the first time anyone has said they’re excited about Kamala Harris. pic.twitter.com/vvvhSDK2KR

Joe Biden and Kamala Harris both enjoy low popularity. Nobody is pounding on the door to get her inside.

Then came the difficult, demanding queries about how much she had given up, along with emojis.

Another softball question from Seth Meyers: “Obviously, you have to make a great many sacrifices to hold this office. But is it true that you can no longer send emojis?”

However, he never called her out for all the people she placed in jail for marijuana use when she said that “No one should have to go to jail for weed.”

Tulsi Gabbard called Kamala out specifically on this during the presidential debate in 2020.

“I strongly believe, and the majority of Americans agree, nobody should have to go to jail for smoking weed, right?”

Meyers never confronted Harris on her hypocrisy on this issue. pic.twitter.com/D4zo1GiEJ3

Harris also used a lot of words while talking about giving kids priority. We are aware that Democrats frequently bring up children. Speaker of the House Nancy Pelosi regularly repeats, “It’s for the kids.” However, whatever they do seems to be detrimental to our children’s future.

“When you see our kids, and I truly believe that they are our children. They are the children of our country, of our communities, I mean, our future is really bright if we, if we prioritize them, and therefore prioritize the climate crisis.”

KAMALA HARRIS: “When you see our kids, and I truly believe that they are our children, they are the children of our country, of our communities, I mean, our future is really bright if we prioritize them, and therefore prioritize the climate crisis.” pic.twitter.com/4NTK0wdIwF

If the kids were really the priority, they wouldn’t cause the economy to collapse through inflation, leaving their parents to worry about whether or not they can provide for them. Democrats merely exploit them as a talking point to advance their agenda before acting in opposition to it.

Kamala Harris accuses Republican governors of “dereliction of duty” for sending illegal immigrants to near her Washington, D.C. residence.

Then she blames Trump and claims it’s actually Biden who’s trying to “fix” illegal immigration (which is at record levels). pic.twitter.com/U23g36haXZ

When Myers questioned her about Texas Governor Greg Abbott bringing illegal immigrants to her door in Washington, D.C., Harris unintentionally made Joe Biden and herself seem bad.