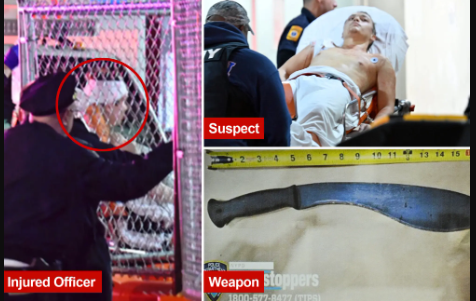 According to police sources, a rookie NYPD officer on his first day on the job was attacked with a machete on New Year’s Eve just blocks from Times Square, and police are investigating whether the suspect is a recently radicalized Islamic extremist.

The officer, who graduated Friday and was assigned to a Staten Island precinct for the night, was stationed at West 52nd Street and 8th Avenue when the machete-wielding madman approached him and two other officers around 9:30 p.m., according to NYPD sources.

According to Police Commissioner Keechant Sewell, the post was located outside the area where attendees were being screened for weapons.

Another cop, an eight-year veteran, was also hit in the head with the weapon and suffered a laceration.

The attack was “unprovoked,” according to Adams, who spoke at a press conference.

The suspect, a 19-year-old man later identified as Trevor Bickford by law enforcement sources, was apprehended and taken to Bellevue Hospital. According to senior law enforcement officials, cops are investigating whether he is a recently radicalized Islamic extremist based on online postings.

Both officers were injured and taken to Bellevue Hospital, where they are expected to recover. Sewell and Adams both stated that there is no “active threat” to the community.

To investigate the shocking attack, police are collaborating with the FBI Joint Terrorism Task Force. The motivation was not immediately apparent.

“There are no backpacks or umbrellas permitted in Times Square. “They forgot about the machetes,” a police source told The Washington Post.

Sewell arrived at the hospital shortly after the injured cops were admitted. On New Year’s Day, around 12:30 a.m., the mayor arrived in a confetti-covered SUV. Earlier, Hizzoner pressed the button to begin the countdown to the ball drop as spectators bid farewell to 2022.

Witnesses said another cop was hit by a police car while attempting to move barricades on 52nd and Broadway to allow responding officers to reach the machete-wielding man.

“They moved the barricades very quickly. He was a police officer in front of the barricade, and he moved it to allow police cars to move quickly — which is when the barricade collapsed and was hit by the car. “He got a double whammy,” witness Kim Novack told The Washington Post.

According to police sources, the officer was taken to Mount Sinai West and is expected to recover.

The area was already known for its rowdiness.

Cops had to intervene just an hour before the machete man ran toward cops when crowds tried to tear down the barricades.

The attack was not the only one in Times Square that night. When a fight broke out between two men on West 42nd Street and 6th Avenue around 8:45 p.m., a man was stabbed in the neck with scissors.

Another male was stabbed “around eight times” near Seventh Avenue and West 40th Street, the NYPD said, hours before the festivities were to begin. According to police, the victim was taken to Bellevue Hospital with non-life-threatening injuries.