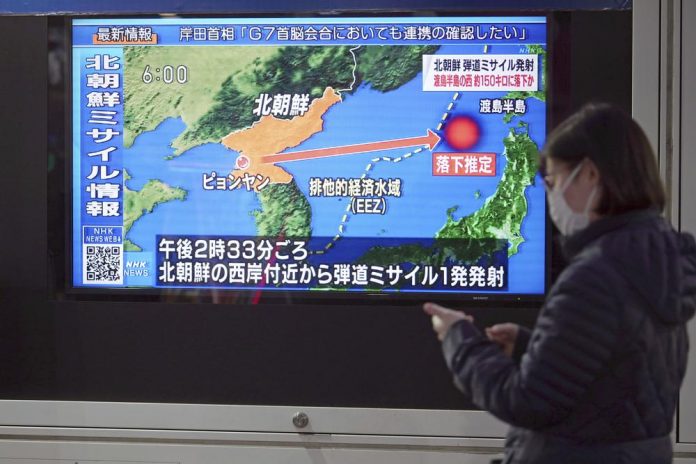 According to its neighbors, North Korea fired a possible largest intercontinental ballistic missile toward the sea on Thursday, upping the ante in a pressure campaign aimed at forcing the US and other adversaries to recognise it as a nuclear power and lift debilitating sanctions.

North Korea’s onslaught of weapons tests this year continued with the launch, which occurred after the US and South Korean militaries warned the country was planning to test a new big ICBM initially disclosed in October 2020.

It stated that it was ready to conduct precision strikes against North Korea’s missile launch sites, as well as command and control infrastructure.

The United States has requested an open Security Council discussion on the launch, which will take place on Friday, according to Linda Thomas-Greenfield, the United States’ ambassador to the United Nations.

The Joint Chiefs of Staff of South Korea stated the North’s ICBM, which was launched from the Sunan area near Pyongyang, traveled 1,080 kilometers (670 miles) and reached a maximum height of nearly 6,200 kilometers (3,850 miles). The missile was fired at a high angle to avoid Japan’s territorial waters, according to reports.

According to Tokyo’s Chief Cabinet Secretary Hirokazu Matsuno, the missile flew for 71 minutes before possibly landing near Japanese territorial seas off the coast of Hokkaido. He suggested Japan might look for debris inside its exclusive economic zone to learn more about the North’s technology.

The Japanese coast guard issued a warning to vessels in the area, but no damage to boats or aircraft was reported right away. A statement from a Japanese fisheries organization denounced the launch as a barbarous act that jeopardizes the lives and livelihoods of fishermen.