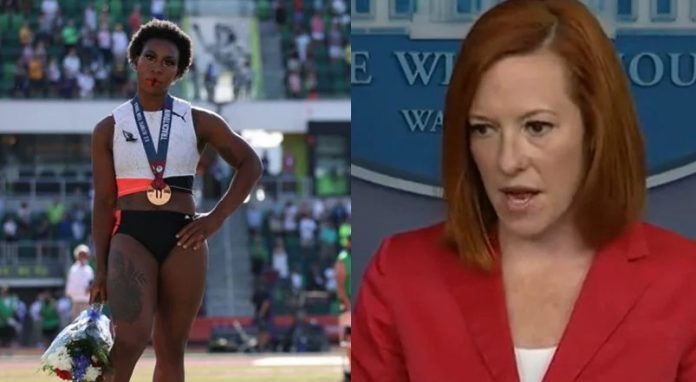 Every time Democrats get a chance to defend the United States of American it often appears that they choose to side with those who believe our country is a racist, evil place.

“This weekend Gwen Berry, who hopes to represent the United States as an Olympian on the hammer throwing events, won a bronze medal at the trials, and then she turned her back on the flag while the anthem played. Does President Biden think that is appropriate behavior for someone who wants to represent team USA,” he said.

.@PressSec Jen Psaki makes excuses for Gwen Berry turning away from the flag during US Olympic trials. @pdoocy pic.twitter.com/30NGSmgWaJ

“Well, Peter, I haven’t spoken to the president specifically about this, but I know he’s incredibly proud to be an American AND has great respect for the anthem and all that it represents, especially for our men and women serving in uniform all around the world,” she said before getting into the liberal schtick about America not always being great.

“He would also say, of course, that part of that pride in our country means recognizing there are moments where we as a country haven’t lived up to our highest ideals. And it means respecting the right of people granted to them in the Constitution to peacefully protest,” she stated.

That is also true. It is our right to peacefully protest. However, if you are part of a team representing the nation, one condition is that you must support it.

Berry placed herself far away from the flag during Saturday’s national anthem, and placed a T-shirt over her head with the words “activist athlete.”

She stated that she felt like the setup was intentional. To be truthful, I was pissed.”

She stated that they had promised to play it before they walked out. It just happened that they played it while we were there. It’s fine. Because it’s not important, I don’t want any discussion about the anthem. I don’t believe the anthem speaks for me. It has never.”

A spokesperson however stated that the setup was not possible.

It was a sentiment that Dan Crenshaw, a Republican Texas Representative, expressed on Monday’s “Fox & Friends”.

Dan Crenshaw calls for Gwen Berry to be removed from the Olympic team because she turned away from the flag pic.twitter.com/c2xWKLXPPJ

He stated, “We don’t need any more activist players.” She should be expelled from the team. The whole point of the Olympic team was to represent America. It’s all the point.

It’s one thing for these NBA players to do it — fine, we’ll quit watching — but what about the Olympic team? The representative stated that there are multiple instances of it.

He said, “They should all be removed. The minimum requirement should be that you believe in the country you represent.”

She said, “At this stage, y’all are obsessed with me,” as if her entire purpose was to draw attention away from herself.

At this point, y’all are obsessed with me https://t.co/HBWCE28s7x