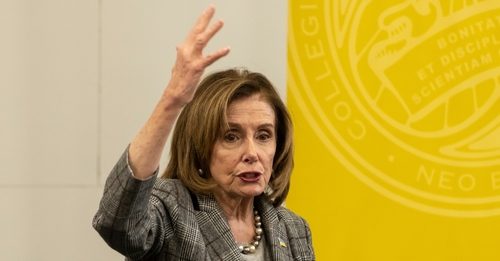 At a White House celebration to combat inflation, House Speaker Nancy Pelosi applauded Biden and asked the audience to applaud for her.

On the day the stock markets hit a record low, Democrats had a “inflation reduction” party to commemorate the adoption of the Inflation Reduction Act.

Nancy Pelosi spoke on Tuesday at the White House event to combat inflation.

The audience remained still and did not react to her remarks as she began to praise Biden. Pelosi stated that she is appreciative to Biden for bringing Americans together and inspiring hopes for a stronger and safer country.

Pelosi asked the audience whether they were supposed to applaud her statements when she noticed total stillness in the gathering.

The audience began applauding when they noticed Pelosi’s plight. Pelosi proceeded by saying that the only person who had applauded her comments on Jill Biden was the first lady.

Pelosi continued to congratulate Chuck Schumer for getting the Inflation Reduction Act through the Senate in her remarks. Pelosi was immediately interrupted by Schumer, who then mockingly requested a round of applause.

Joe Concha, a writer for Fox News, criticized Pelosi for pleading for applause. Concha observed that Pelosi was portraying a stand-up comedian, who requests laughter from their audience after telling a joke.

Nancy Pelosi forces applause as she praises Biden at their celebration.

“You’ve only recovered maybe a quarter of the damage YOU created…the reason they’re not clapping is there’s nothing to clap for!”@BooyensJaco

Concha also asserted that Pelosi was having a Jeb Bush moment, alluding to a 2016 campaign event where Jeb Bush requested applause from the crowd while speaking.

At a time when the nation is struggling with soaring inflation, the White House is throwing a celebration to celebrate the lowering of inflation. Thus, the political elite is unconcerned by reality, which is pressuring them to commemorate an out-of-touch event, Concha continued.

Due to the date of the celebration, even leftist media sites like CNN distanced themselves from Biden. CNN claims that Biden is jubilant despite the stock market’s precipitous decline, which represents the declining state of the economy.

The Dow Industrial Average fell by nearly 1,300 points on the day that liberal Democrats were busy hosting a celebration in the White House. The Nasdaq and S&P each experienced a 5% and 4% decline.