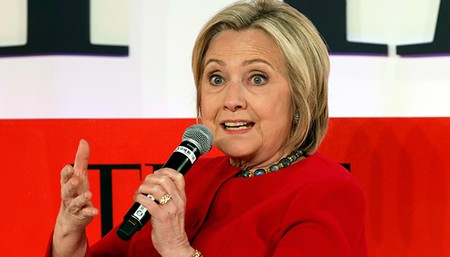 It’s both sad and funny at the moment. She’s still not over it, and is worried that he will win against Joe Biden and Kamala Harris.

Hillary Clinton stated that “If I was a gambler right now, I would say Trump is going back to run.”

Geist was told by the former secretary of state at 74 that he seemed to be setting himself up for this, and if he isn’t held accountable, he gets it again.” [….]

She said, “I believe that could be the death of our democracy.” “I don’t want to be too harsh about it, but I want people understand that this could prove to be a crucial turning point. You will not recognize this country if he or his ilk were to be elected president again, particularly if he has a Congress that does his bidding.

Because of the damage that Joe Biden, the Democrats did to our country over the past 11 months, and the past four years, we don’t recognize it now. Hillary Clinton is the one who “attacked Democracy” by paying for collusion disinformation in order to harm her political opponent. Talk about undermining Trump’s election. She did everything she was accused of and continues to challenge the legitimacy of Trump’s election.

She tried her best to warn us about the evil orange man, but she was heroic. She refuses to accept that she lost, even though people wanted Trump. Instead, she blames James Comey.

“I tried to warn people,” she said. “I tried to make the case that this was really dangerous — the people he was allied with, what they were saying, what he might do. I do think but for Jim Comey and the stunt he pulled 10 days before the election, I would have won.”

James Comey was also the one who incorrectly decided to give her a pass instead of charging her. She doesn’t want anyone to see how much she benefited from it.

In her interview with Geist, Clinton continued:

“Clearly, there were people who liked what they saw, despite what I see as the real dangers to our country. They turned out and voted for him. And he’s trying to get it set up so that will happen again for him, even as he loses, as he did twice the popular vote.”

She is clearly frustrated and, although I don’t know if she is, it seems like she may be preparing to run again. It’s possible she is so frustrated that Joe, despite all her efforts, got in.

NEW – Hillary Clinton appears again and claims that a “demagogue” has taken over the Republican Party.pic.twitter.com/KszhzKDLd1

If we think we would have fun with a rematch between Joe Biden and Donald Trump then imagine if Hillary Clinton tried to defeat Joe Biden or Kamala Hariri in a primary. It would be great fun to see them ripping each other apart and then being decimated by Trump.