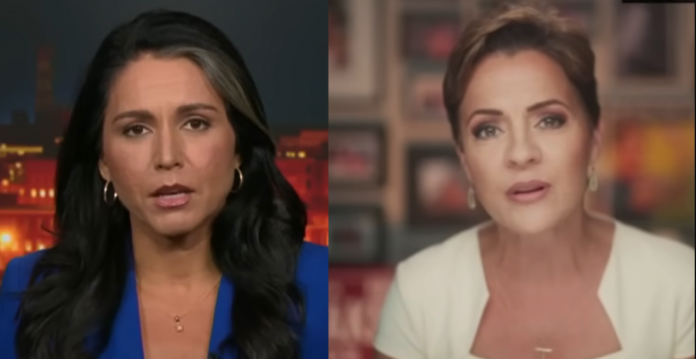 Tulsi Gabbard, a former Democratic representative, shocked the party and its media allies by endorsing Kari Lake for governor of Arizona. Republican candidate Lake seemed to be headed for a resounding victory.

Mostly because her Democratic opponent won’t take the GOP nominee on in a debate. Cowards are disliked by voters, who are less likely to elect them.

“For too long establishment leaders from both parties have sought to enrich themselves, play games, and build up their power while ignoring and even enabling the suffering of millions of hard-working Americans.Kari Lake is a leader who puts people first, is fighting for border security, energy independence, public safety, and other policies that actually make life better and more affordable for the American people. Kari Lake isn’t afraid to call out the warmongering elitist cabal of permanent Washington and the Military Industrial Complex, and their propagandists in the mainstream media.”

For too long establishment leaders from both parties have sought to enrich themselves, play games, and build up their power while ignoring and even enabling the suffering of millions of hard-working Americans. Kari Lake is a leader who… (1/3) pic.twitter.com/TTpMiOsiSF

When questioned about why she was endorsing the Republican for the New Hampshire Senate seat, Gabbard responded that she was an independent and had outlined the reasons why the current Democratic Party, which is run by zealous ideologues and is hostile to freedom, is a party she can no longer be associated with.

She added that she is campaigning with Don Bolduc because she is confident in his dedication to putting country and the American people first and believes that more politicians and candidates for office would be wise to share this viewpoint.

“It makes every sense when you look at the things, the fundamental foundational things that we share in common, which is the constitution, it’s freedom. It’s the Bill of Rights. It’s taking care of serving the needs of people here in New Hampshire and across the country,” she concluded.