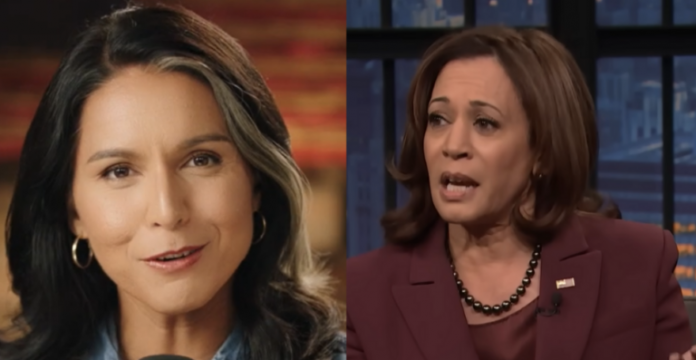 “Kamala Harris is a perfect example of everything that is wrong with Washington and the Democratic party of today. We had a person running for president who she claimed to be very proud of her record. And so I took the opportunity to hold her to account for that and explain to the American people why she did what she did. Nothing happened to her when she smoked pot, but she was very happy to keep people in prison and put people in jail for doing the same thing. To be associated with a party that is driven by this woke insanity, essentially opposing and undermining our freedoms, is not something that I could do any longer.”

She already stated that she adores our nation. She is inspired by the God-given rights to freedom, life, and liberty that are written in our Constitution and Bill of Rights. In response to the call to service, she took an oath and vowed to spend the rest of her life in public service in support of those liberties.

She added that having spent her formative years in Hawaii, she developed a unique appreciation for their house, water, and other priceless natural resources. She made the decision to run for the Hawaii State House when she was 21 years old in order to be in a position to defend the environment. Prior to that, she had no political affiliation, but when it came time to submit her election paperwork, she had to decide which party to join.

She was motivated in her research by Democrats who opposed the Vietnam War and those who spoke up for Hawaii’s plantation workers who were being mistreated and exploited by powerful landowners.

She also mentioned, “I can no longer remain in today’s Democratic Party that is now under the complete control of an elitist cabal of warmongers driven by cowardly wokeness, who divide us by racializing every issue and stoke anti-white racism, actively work to undermine our God-given freedoms enshrined in our Constitution, are hostile to people of faith and spirituality, demonize the police and protect criminals at the expense of law-abiding Americans, believe in open borders, weaponize the national security state to go after political opponents, and above all, are dragging us ever closer to nuclear war.”