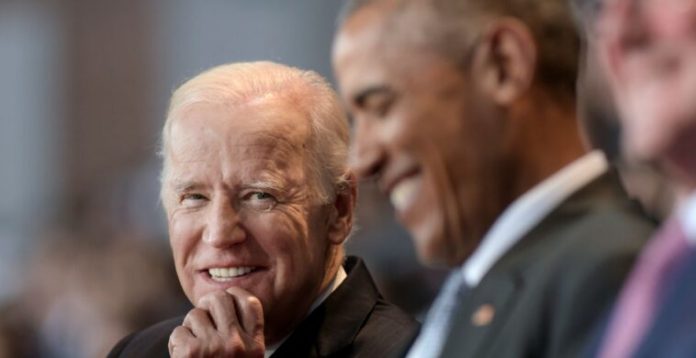 Donald Trump gave a phone interview to Newsmax’s “Spicer & Co.” on Tuesday, and gave his assessment of the Biden administration so far as “worse than Obama.”

Listen To The Snippet:

“He’s worse than Obama,” Trump said. “Of course, Obama is probably running the government now, anyway, according to many,” he stated.

There are strong reasons to believe Joe Biden is a “missing” President and that other people are running the show.

Although a few of the names that have surfaced as ‘shadow presidents,’ Barack Obama is one of the most prominent frequently mentioned.

Barack Obama is a fascinating case because he was reluctant to support his former vice president in his 2020 presidential campaign.

“Don’t underestimate Joe’s ability to f–k things up,” Obama said, according to an unnamed Democrat in a Politico story.

After Biden’s presumed victory in the election, Obama’s sudden revival was documented in a Guardian piece titled “The shadow Obama.”

“He’s back with a vengeance,” the Guardian notes. “After four years lying low as Donald Trump occupied the White House, Barack Obama is suddenly everywhere again – on TV, on radio, online and in bookshops. The 44th US president’s memoir, A Promised Land, was published this week and, shifting nearly 890,000 copies in its first 24 hours, is likely to become the bestselling presidential memoir in modern American history. It topped his wife Michelle Obama’s book, Becoming, which sold 725,000 copies on day one.”

“As he promotes the 768-page tome, Obama is being asked what influence he and his allies may wield when his former deputy, Joe Biden, assumes the presidency in January,” the report goes on. “It is a double-edged sword. Biden knows that he will always be able to call on his old boss for advice – but he has big shoes to fill and could suffer by comparison.”

“I’m certain Barack would be happy to react to any question or request Biden put to him,” said David Garrow, author of Rising Star: The Making of Barack Obama.

Obama stated that Biden doesn’t need his advice and that he will receive all the help he needs in an interview on CBS Sunday Morning. I don’t plan to work suddenly on the White House staff.

Joe Biden made at least 21 visits to Delaware during his presidency. However, the White House does not log White House visitors. Although it is not known who the struggling president is speaking with, there are likely to be powerful political figures such as Barack Obama or other prominent leaders.