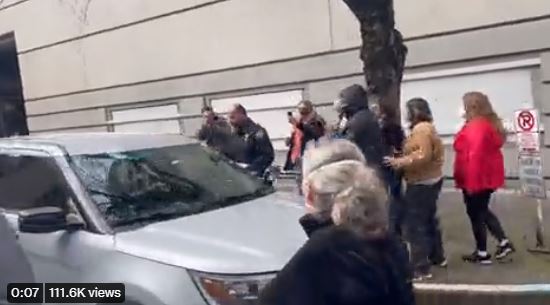 Andy Ngo is one of the brave reporters who has risked his life and reputation to expose Antifa as the violent band of thugs that it is. Despite being beaten and brutalized by those cruel thugs, he has continued to press for and expose their attacks on civil society’s essential pillars.

Most recently, he uncovered Antifa’s involvement in a shooting, cover-up, and targeting of individual police officers in Portland over the course of a huge Twitter thread.

After the mass shooting involving #antifa at their gathering in Portland last night, they're calling for comrades to delete evidence from social media & to not talk to investigators. pic.twitter.com/2djBBVtWlb

Disinfo #antifa accounts are spreading false claims about the shooting in Portland. They falsely claim I posted a flyer about their event & that I was involved in the shooting.

Marysa Leyva says it is time for me to die. Felony suspect Alissa Azar says I have blood on my hands. pic.twitter.com/6RrBm1iZ5G

The Portland police department attempted to conduct a press conference following the incident, but it was disrupted by Antifa thugs, who are notoriously violent and unreasonable.

Things took a turn for the worst from there. Antifa militants began acting like drug cartels in Mexico or the Taliban during the Taliban’s reconquest of Afghanistan after closing down the news conference, seeking down a police officer who stood in their way.

Even if police and Antifa despise one other, it’s rare for the mafia to go after individual cops and hunt them down, even if it’s just for harassment. That belongs in a war-torn third-world country, not the United States.

But it’s happening here as the administration hasn’t treated Antifa like the terrorist organization it is, or intervened to stop it from harassing and occasionally violently attacking its political opponents.

Rather, leftists like Chris Wray pretend that Antifa is only an ideology, allowing the group to continue tossing Molotov cocktails and harassing specific police officers.