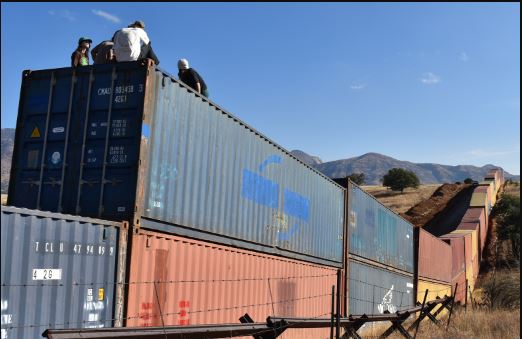 The US government has filed a lawsuit against the governor of Arizona over the erection of a temporary shipping container wall at the US-Mexico border.

The border barrier was started early this year, according to Governor Doug Ducey, in an effort to safeguard the border.

However, the government asserted in its complaint that Arizona was trespassing on federal grounds.

In recent months, hundreds of thousands of migrants have been arrested while attempting to enter the border.

Republican Governor Ducey and other opponents of President Joe Biden have criticized how his government has handled border concerns.

Three weeks before Governor Ducey leaves office and is replaced by Democrat Katie Hobbs, who has already stated her opposition to the barrier, legal action has been taken.

What Ms Hobbs will do with the containers is still up in the air. She has stated that she is looking into all possibilities and issued a caution that removing the containers might be expensive.

In Arizona’s San Rafael Valley, the government is requesting a court order to halt construction on the barrier and require the removal of the shipping containers.

According to the argument, Arizona has felled and removed a significant number of trees, obstructed drainage systems, and damaged the habitat of species protected under the Endangered Species Act as a result of the development.

The federal government is also pursuing damages in order to repair any harm the barrier may have done.

As a temporary barrier, the shipping containers were to be removed, according to Governor Ducey. However, he has requested from the Biden administration a timetable for when the remaining holes in the permanent border wall will be filled.

After he had criticized the federal government for not doing enough to meet a record-breaking number of migrants coming at the US-Mexico border, he signed an executive order in August directing his state to instantly cover the gaps.