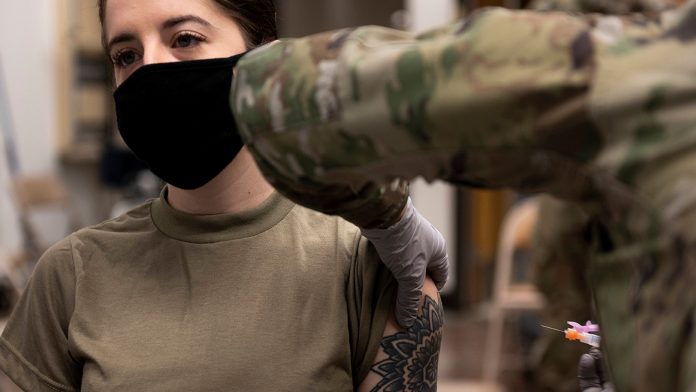 The U.S. The U.S. Air Force announced Monday that 27 airmen on active duty were administratively dismissed for refusing to take a COVID-19 jab. They also pledged to refuse to do so again.

Ann Stefanek, a spokeswoman for the Air Force, stated that all of the airmen were young and had served less than six years. The Wall Street Journal reported these individuals didn’t serve long enough to be eligible for a hearing prior to their discharge. According to the paper, 97% of active duty members have followed orders issued by Defense Secretary Lloyd Austin in August.

Air Force forces were given until Nov. 2, and many have refused to receive the vaccine or requested an exemption. Austin ordered all branches of the military to get the vaccine on Aug. 25, after the spike in summer-related infections. The National Guard and Reserve members are required to comply by Dec. 2. Fox News sent an after-hours email to the Air Force, but they did not respond immediately.

The Washington Post reported that around 40,000 military personnel are refusing to receive the vaccine. According to the paper, military leaders “have few options to address the dissent other than to hope that, as waiver requests are denied, more troops will choose to fall in line.”

The Journal noted that the issue of vaccine mandates in military units has been contentious and cited a letter Sen. Jim Inhofe (R-Okla.), the top Republican on Senate Armed Services Committee sent to Austin.

The letter stated that “At a time when our adversaries continue to increase their quantitative and qualitative advantage against our forces, we should seek to ensure that no policy, even unintentionally, hinders military readiness.”