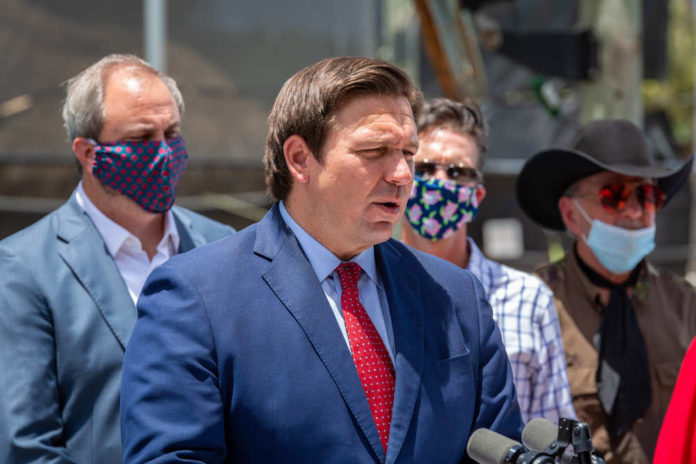 As a general rule, Democrats are used to Republican politicians who surrender. In fact, Their political strategy is based on pressuring Republicans until they give in to media pressure or try to find common ground.

There is however a new breed of Republicans that Democrats cannot force into submission, no matter how hard they try.

Ron DeSantis, Florida Governor, is exactly such a Republican.

The White House’s inept goobers have attempted to subdue DeSantis with their Attack Republican tactics. They have failed. DeSantis has responded so skillfully that the White House isn’t sure how to handle it.

President Biden decried Ron DeSantis as well as Texas Governor Greg Abbott at a press conference on August 2. He claimed they were bad for not mandating vaccinations or masks.

Biden, who considers himself to be a bit tough, demanded that DeSantis or Abbott do what he asked or “get out the way of people trying to do right things.”

Evidently, Biden, after 40-plus years of Republicans giving in to tough guy talk, didn’t consider that Ron DeSantis wasn’t a Gentleman Loser, like Mitt Romney and Asa Hutchinson.

Biden’s allegations were quickly addressed by DeSantis with an epic response.

After making remarks about Florida’s economy DeSantis ended by dismantling Biden’s COVID response brick by brick – repeatedly telling Biden that DeSantis will stand in the way of his pursuit of freedom for Floridians.

The White House was not used to dealing with such resistance from Republicans and didn’t know how to handle this complete dismantling by incompetent Joe.

A reporter attempted to interview Biden about DeSantis’s answer after DeSantis had responded. The cognitively impaired president was unable to respond and pretended that he didn’t know DeSantis – as if such an elementary school response would be better for a man like Ron DeSantis.

Here is the president responding to my question about ⁦@GovRonDeSantis⁩ using Biden's words against him to say DeSantis is "getting in the way" over COVID rules. President Biden: "Governor who?" Watch. pic.twitter.com/mmjznTsLcf

Yes, it was a great joke by reporters – they even laughed at Biden’s “Governor Who?” but that’s mostly because White House reporters can be just as immature as the president they cover.

But unlike Biden, who only pretends to be a tough guy, Ron DeSantis showed Biden just what “tough” looks like:

"What else has Biden forgotten?

He's forgotten about the crisis at our southern border, about inflation that is biting the budgets of families throughout the country, about the demonstrators fighting for freedom in Cuba, & even about the Constitution itself." – @RonDeSantisFL 🔥 pic.twitter.com/7c9eVreiNB

In all the political posturing of the White House, it is easy to forget that DeSantis does not allow mask-wearing but he has banned mask mandates. He has repeatedly stated that Florida parents are free to wear masks to school if they choose. DeSantis was not trying to force parents to wear masks.