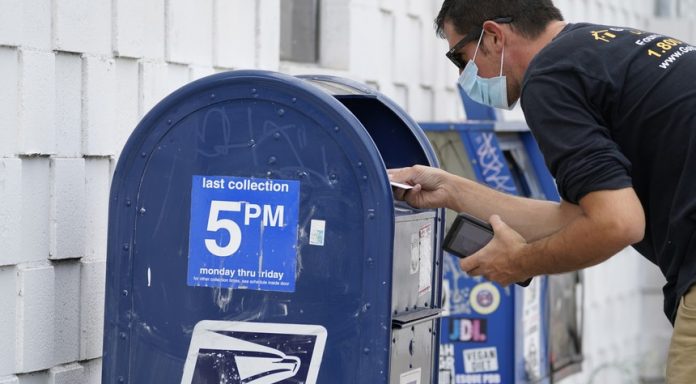 When the U.S. Postal Service is found to be yet another agency illegally spying on Americans, there can be no further doubts that the federal government has grown far too powerful. The service was reportedly tracking various left and right-wing activists and protests, ostensibly to prevent violence.

The Washington Times obtained records that revealed that the USPS “snooped on Americans focused on issues related to guns and President Biden’s election.”

Postal inspectors tracked the actions of gun rights activists gathering in Richmond, Virginia; people preparing to demonstrate against police in Louisville, Kentucky, after an investigation into the police shooting of Breonna Taylor; and far-right groups headed to the District of Columbia after Mr. Biden’s election.

Cato Institute senior fellow Patrick Eddington obtained redacted documents through a Freedom of Information Request elaborating on the postal inspectors’ surveillance operations between September 2020 through April 2021. The records include the agency’s social media surveillance apparatus known as the Internet Covert Operations Program (iCOP). He indicated that the records show a widespread spying effort that was “capable of reaching into every home and business in the country,” according to The Washington Times.

“The Postal Service cannot reliably deliver mail to my own home, yet they can find the money and people to effectively digitally spy at scale, including on Americans engaged in First Amendment-protected activities,” Eddington told The Times.

The agency monitored “peaceful armed protests” involving participants advocating for the Second Amendment in Virginia on “Lobby Day” in January 2021.

The agency’s social media surveillance found that a “Million MAGA March” scheduled for November 2020 would cause traffic delays in D.C., Maryland, and Virginia. The documentation noted that the event was being advertised on a “conservative forum.”

Postal inspectors also developed bulletins detailing how analysts were conducting surveillance on social media platforms Parler and Wimkin. “The Postal Service assessed on Jan. 12, 2021, that the deplatforming of Parler likely disrupted coordinated protests planned for Inauguration Day, which postal inspectors compared to the riot on Jan. 6 at the U.S. Capitol,” according to the report.

Several bulletins claim the reports were not intended to violate the First Amendment but to share information with other law enforcement agencies about possible violence and criminal activity. It also included a threat to House Speaker Nancy Pelosi (D-CA) and a tweet threatening Postmaster General Louis DeJoy.

The agency claimed it “occasionally reviews publicly available information in order to assess potential safety or security threats to Postal Service employees, facilities, operations and infrastructure” in a written statement given to The Times.

It might surprise Americans that this is the case. The U.S. Postal Service has an enforcement arm. This type of surveillance, however, isn’t exactly new.

In 2021, Yahoo News published a report in which it detailed other documents showing that the agency was collecting social media posts and other data about planned protests and other events. It was monitoring posts related to the March 20 World Wide Rally for Freedom and Democracy, in which participants demonstrated against lockdown measures and other matters. One of the images showed two Parler users saying the rally would be an opportunity to engage in a “fight” and “do serious damage.”

“No intelligence is available to suggest the legitimacy of these threats,” one of the documents read.

Postal inspectors are not allowed to perform surveillance that isn’t related to the safety of postal workers or crimes involving mail. The documents reveal that the agency spied on a wider range of people.

At the behest of the House of Representative, the USPS Office of Inspector General investigated the program. The probe found that iCOP used “proactive searches” that “did not include any terms with a postal nexus.” This means the agency was conducting searches that had nothing to do with the postal service.

The investigation also discovered that iCOP used “one of the 10 profiles established in the [redacted] intelligence tool to conduct searches that were not legally authorized.” The apparatus looked at terms on social media that “did not include any terms related to the mail, postal crimes, or security of postal facilities or personnel.”

“Instead of starting by investigating crimes with a link to the post office, the program manager told the investigators that they went with the opposite approach, casting the widest net possible and then working their way backwards to see if it has any link to the post office ‘in an effort to broadly identify threats that could then be assessed for any postal nexus,’” according to Vice News.

Normally, we would expect a similar report about the NSA or FBI, or CIA. But The postal service? The Biden administration appears to have given any federal agency the right to spy on American citizens. Already the inspector general’s report was damning. Even with all this, the question is: Will the post office be able to focus on relevant issues?