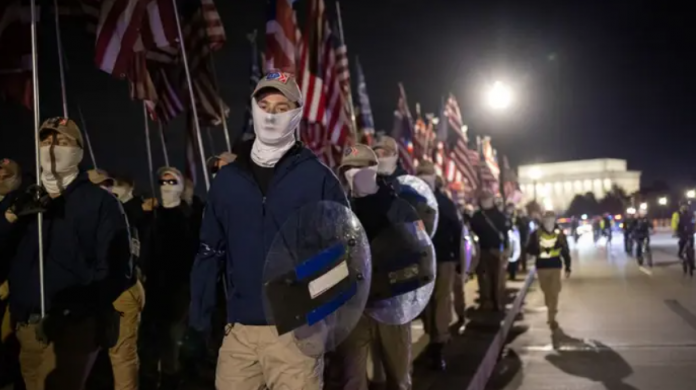 After being discovered crammed in the back of a U-Haul truck near an Idaho pride celebration on Saturday, dozens of masked men suspected of being linked to a White supremacist group were detained.

The U-Haul was halted by local and Idaho State Officers several blocks from the pride festival on Saturday afternoon, and police verified in a press conference that 31 people from various states were inside.

According to certain human rights groups, some of the guys inside the truck wore khakis, navy blue shirts, and beige hats with white balaclavas concealing their faces, and police claim some of them wore insignia that associated them with Patriot Front, a White nationalist organization.

These were just sent to me from Georji Brown:

Police detained a U-haul filled with men in masks at Coeur d'Alene's Pride in the Park.

The men looked to be carrying a makeshift riot shield as well as other protective gear. The reason for the truck’s stop was not immediately obvious.

The guys are shown kneeling on the grass with their hands zip-tied behind their backs in videos released on social media.

On the back of one garment was inscribed, “Reclaim America”

Hundreds of police officers encircled the group, who were led one by one to patrol cars and stripped of their masks, hats, and sunglasses. After that, they were escorted to a police vehicle.

All 31 persons have been charged with conspiracy to riot, according to Coeur d’Alene Police Chief Lee White.

White went on to say that police were warned off by a citizen, not a Patriot Front law enforcement source, as some on social media had alleged.

A request for comment from Fox News Digital was not immediately returned by Idaho State Police.