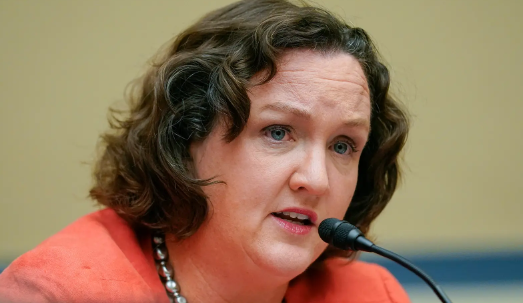 A Democratic congresswoman was accused on Thursday of acting in retaliation against a staff member who, according to the politician, exposed her to COVID-19 this past summer when she was working together while unwell.

As a Wounded Warrior Fellow in Rep. Katie Porter’s office starting in 2020, Navy veteran Sasha Georgiades claimed to Reason magazine that she was forced to work remotely for the last few weeks of her fellowship and that once Porter retaliated, her employer never spoke to her again.

“Why did you not follow office protocol on testing?” Porter, 48, allegedly asked Georgiades in a July 9 text message obtained by the news outlet. “It’s really disappointing”.

Georgiades claimed that the “office protocol” mandated taking a COVID test as soon as one even faintly felt ill. She claimed to Reason that the pain she was experiencing was “simply from exercising.”

“I’m terribly sorry,” an apologetic Georgiades responded at the time. “You’re right I should have done better. Just because I felt okay in the moment doesn’t mean that I was.”

“Sasha — I cannot allow you back in the office, given your failure to follow office policies,” Porter then told her. “Cody will be in touch [about] having your personal effects shipped or delivered to your home, and will lay out your remote work schedule and responsibilities for your last few weeks.”

After testing positive for COVID-19 about the same time, Porter, who was elected to represent California’s 45th District in 2018 and has since been reelected again, became furious and texted Georgiades, “Well you gave me COVID. In 25 months, it took you not following the rules to get me sick. My children have nobody to care for them.”

“She never spoke a word to me after this,” Georgiades, whose fellowship ended in August, told Reason.

Georgiades disputed Porter’s assertion that the single mother was scheduled to be in Washington, DC that week in order to be away from her three children, who live in California.

“If she thought she was going to go the rest of her life without it, that’s impossible,” Georgiades said of Porter’s reaction.

In a statement, Porter’s office confirmed the authenticity of the messages, saying: “This former employee was not fired. She was a fellow in our office, and weeks before she breached COVID protocol in July, we had already mutually agreed on an end date in August 2022.