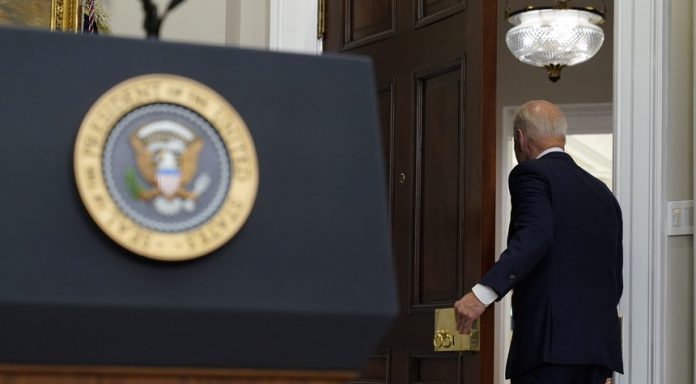 Joe Biden stated during the 2020 Presidential Campaign that he has the most experience of anyone who ran for President due to the years he spent as Vice President of Barack Obama and the eight years he served in the United States Senate.

He has been a friend of the Congrees players for many decades. He is familiar with the international players and considers them to be friends in certain cases. He has been to the most important decisions in our country’s history.

He has now assumed the Presidency. Despite all the experience he has gained from his years in the swamp, Thursday’s press conference revealed that someone tells him who to contact for any questions.

Actually, he said he was “instructed” whom to call upon.

Biden spoke for approximately ten minutes to the nation and the White House Press Corps about the bombings in Afghanistan that occurred early Thursday morning. At least 13 U.S. service personnel died in the attack and many others were injured. It was an emotional rollercoaster watching the Commander-in-Chief go through what was happening on a sad day. I had hoped for words of encouragement but instead, I saw a tired old man who should have been eating ice cream at a bench with Forrest Gump.

Don’t take my word for it; you can just watch the clip.

He limped into the end of his remarks as he was about to finish what appeared to be a teleprompter-read statement around the ten-minute mark.

The written version of this does not do this justice. You really need to go and watch how he is fumbling around looking for his pre-approved list of reporters to call on. He makes this bizarre admission at the 11-minute mark.

While I am sure that many of our leftie friends won’t admit that voting for Joe was a bad idea, they will all agree that this is not a new concept. The White House press secretary has ALWAYS made it clear who their bosses are to reach out to, and that is at least partially true. In the old days, when journalists would report news regardless of who they voted for or their political affiliations, it was a tradition to call Helen Thomas, the dean, the press corps. We have had a little more Helen since she is no longer here.

Donald Trump was a new type of President. He would interact with journalists even while he was going to the toilet. He enjoyed taking on reporters from CNN and NBC, calling them fake news, and giving the press corps greater access than any President of the modern era.

Joe Biden must be given instructions on who he can call and have a sheet listing names and faces of reporters to ensure he’s calling the right person. Although I had a cheat sheet growing up, I didn’t claim to be the most qualified person to run for the Leader of the Free World job.

If I had no other choice, I would assume that Joe, when he said he was instructed today that he has been yelled against for not following the instructions in the past. That makes me sad for my country.

If Joe Biden was the best person to represent us last November, and he is also one of the most experienced people ever to hold the Presidency.

We are truly screwed.