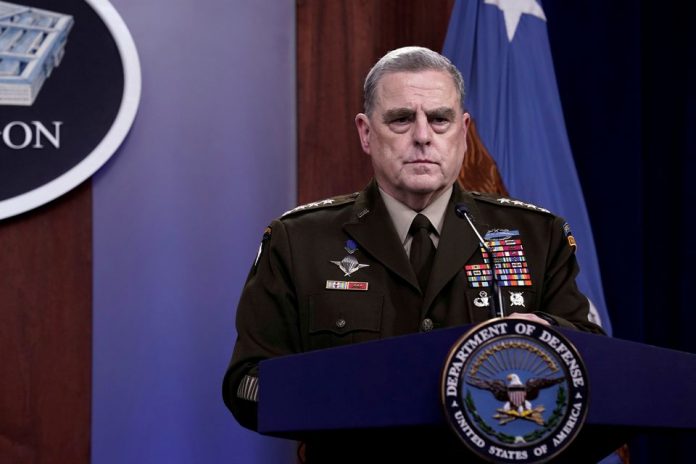 On Wednesday, President Joe Biden backed Mark Milley, the top U.S. military official. This was just a day after a new report claimed that he called his Chinese counterpart secretly to raise concerns about Donald Trump.

Milley’s Office rebutted the report in the book. They claimed that the calls he made while chairman of Joint Chiefs of Staff was coordinated between the Pentagon and the U.S. government.

The book contains excerpts that Milley called General Li Zuocheng, People’s Liberation Army, twice during the Trump administration’s final months to inform him that the U.S. government was still stable. Milley told Li that the United States would not attack China and that if there was, he would notify him in advance.

These excerpts were published by the Washington Post Tuesday.

There were concerns that Milley might have subverted civilian control. However, Biden stood by him Wednesday.

“I have great confidence in General Milley,” Biden stated.

Colonel Dave Butler, a spokesman for Milley, said Milley’s calls with Chinese officials and others in October and January were in line with his responsibility to “maintain strategic stability.”

“All calls from the Chairman to his counterparts, including those reported, are staffed, coordinated and communicated with the Department of Defense and the interagency,” Butler said in a statement. “General Milley continues to act and advise within his authority in the lawful tradition of civilian control of the military and his oath to the Constitution.”

The contents of the calls were not directly disputed by him.

Milley was also strongly supported by the Pentagon.

“The secretary has complete and utter trust and confidence in General Milley and in his role as Chairman of the Joint Chiefs of Staff,” Pentagon spokesman John Kirby told reporters, while declining to address the book’s allegations.

The book, “Peril,” by journalists Bob Woodward and Robert Costa, which they said relied on interviews with 200 sources, is due to be released next week.

“For the record, I never even thought of attacking China,” Trump stated.

Trump, a Republican named Milley to the top post in the military in 2018, but began to criticize him and other appointees after losing the presidential election in November 2020 to Biden.

According to the Washington Post the book said that Milley also called senior officers to examine the procedures for launching nukes and informed them that the president could not give orders to use them alone, but that he needed to be involved.

“The meeting regarding nuclear weapons protocols was to remind uniformed leaders in the Pentagon of the long-established and robust procedures in light of media reporting on the subject,” Butler stated on Wednesday.